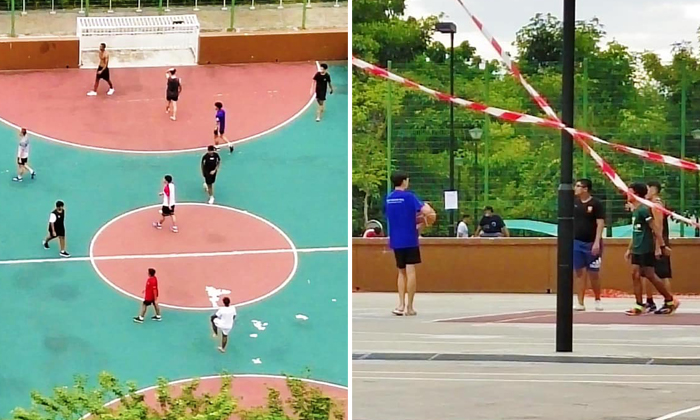 Tampines Town Council is appealing for information on a group of people who were seen gathering on a barricaded futsal court and breaching safe distancing measures.

In a Facebook post on Tuesday (June 22), Tampines GRC MP Baey Yam Keng shared photos of the group on the basketball and futsal courts near Block 494J Tampines Street 45.

He said a resident had taken the pictures at 5.30pm on June 19 and emailed them to him.

The town council had already barricaded the fustal court then, following observations that "some people" were not adhering to safe distancing measures, said Mr Baey.

He added: "It is obvious that they broke through the barricades. So firstly, they committed the offence of forced access to closed common facilities.

"The large numbers also violated the prevailing measures of not more than five people in a gathering."

Mr Baey also said: "We are appealing to public for information on these individuals so that the authorities can identify and take them to task.

"I urge all to abide by the safe management measures so that we can keep everyone safe from the pandemic."

According to Mr Baey, the futsal court had been closed since June 8 and barricades were first put up on June 17.

However, the town council continued to receive feedback on "many people playing in the court" and not observing safe distancing measures.

Mr Baey added: "The netting to cordon off the court was always found loosened or dropped on the floor because of trespassing. The already overworked cleaners had to tighten/secure it.

"On June 21, the town council had to borrow water barriers and metal barrier fencing from contractors to further enhance the closure of the futsal court."

Similarly, the adjacent basketball court was also cordoned off on June 21 due to crowd-playing.

When The Straits Times asked if any police report had been made about the incident, Mr Baey said he did not file one and did not think the resident had reported it.

He said he would usually advise residents who spot others flouting safe distancing rules to make a report on the Government's OneService app, which allows users to report municipal issues.

First-time offenders who breach safe distancing measures may face a composition fine of up to $300, while second-time offenders can be fined up to $1,000 and may also be charged in court.