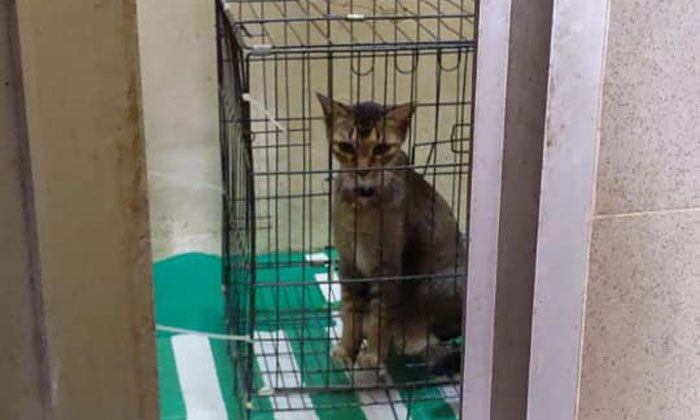 A town council apologised on Monday (Nov 18) for the way it handled the relocation of a cat due to a resident's complaints, after it placed a cat in a bin centre last Friday (Nov 15).

Its apology comes after a Facebook user, Ms Rachel YukiMizu, posted on the same day that two cleaners were carrying a cat and had placed it in a rubbish chute area.

An eyewitness had alerted Ms Rachel to the matter, according to her post on Facebook group "Sayang Our Singapore's Community Cats".

Ms Rachel had approached the cleaner to check if the animal belonged to someone but was turned away, she said.

As she could not reach the town council despite repeated calls, she called the police.

The Straits Times understands that the police helped to mediate discussions between the Cat Welfare Society (CWS) and the town council.

The Tampines Town Council acknowledged on Monday that there was a "lapse in protocol in the handling of the recent cat-related matter".

It said in a Facebook post that it had repeatedly received feedback about cat defecation and urination outside a resident's unit, and that the resident had asked for the town council's help to address the issue.

"As the town council staff was relatively new, instruction was given to safely relocate the cat. The bin centre was used as a temporary transit point. It was never our intention to cause any harm to the cat," the town council said.

It added that it has issued a warning to the staff and will continue to work closely with CWS to educate its staff on the proper management of cat-related issues.

CWS president Thenuga Vijakumar told  ST on Monday (Nov 18) that the cat was returned to the community last Friday, after the mediation.

The number of such reports has increased as more people are reporting missing cats, but it is not possible to tell if there has indeed been an increase in cases of cat relocation, she said.

"While relocation may be one of the reasons for a cat to go missing, there may be other reasons that the feedback provider may not be aware of."

As for the Tampines incident, loud "meowing" sounds can be heard in a video in Ms Rachel's Facebook post, as the person who filmed it moves towards a door at the back of the bin centre. A photo in the same post shows a cat in a cage, behind a door.

Netizens expressed concern for the cat in comments on the post.

"I cried and my body was shaking reading this whole story! Thank goodness the cat was taken out," commented Ms Rheann Kester.