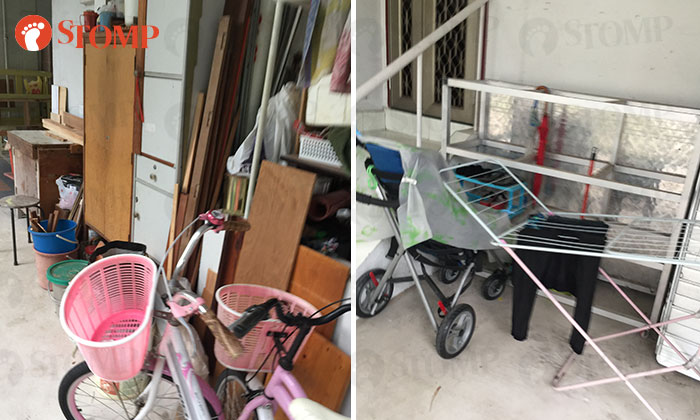 Stomper M is concerned that some of the residents in his neighbourhood have turned the common corridors into their own “mini kampungs” placing items which obstruct the passageway and pose fire safety hazards.

In a phone interview with Stomp, M who has stayed in the neighbourhood for more than 10 years said that some residents on the ground floor place their belonging on the corridors.

“The issue has been here since I first moved in years ago. The corridors have become unsightly with all these items. This does not reflect well on our neighbourhood.

“They have turned the place into their own “mini kampung”

“These items also create inconvenience by blocking the passageway. Residents have to make detours because of this inconsiderate neighbours.

“Most importantly these items block off the passage and pose a fire safety hazard. What will happen in the event there is a fire?

“Lastly, all these potted plants and items can serve as breeding grounds for mosquitoes.

“It’s just better since they have a lack of space as compared to those living on the ground floor.

“Some of them have so many potted plants outside. I think it’s time we put in some effort to change our neighbourhood.”

In response to a Stomp query, a spokesman for the Tampines Town Council said that its officers conduct checks to the estate on a regular basis.

"Identifying corridor obstruction and cluttering is also part of our effort on general maintenance.

"We understand that it is a general culture across Singapore where most residents keep potted plants and some other items such as shoes racks at the common corridor.

"According to Town Council by-laws, all corridors are to be kept clear of items. However, the Town Council practice flexibility in exercising our by-laws, as long as there is no inconvenience caused to their neighbours and safety is not compromised."

With regards, to the photos taken by M, the town council spokesman said:

"Reference to the photos to feedback at block 468 and Blk 452, we would like to inform that there is a 1.2m clearance and no obstruction to the walkways.

"With regards to the concern on mosquito breeding, the Town Council cleaners are tasked to remove stagnant water as part of their daily works. Should there be a suspected source from residential plants, the cleaners will also report back and the Town Council would engage the residents to advise on this.

"To share, the Town Council also conducts frequent checks and oiling to the drainage around the area to prevent breeding.

"Tampines Town Council hears the feedback from your contributor and will be conducting additional checks to Block 468 and Block 452 to ensure that there is no breeding and obstruction.

"We would like to assure the residents that Town Council will not hesitate to enforce on non-compliance should there be a safety concern."