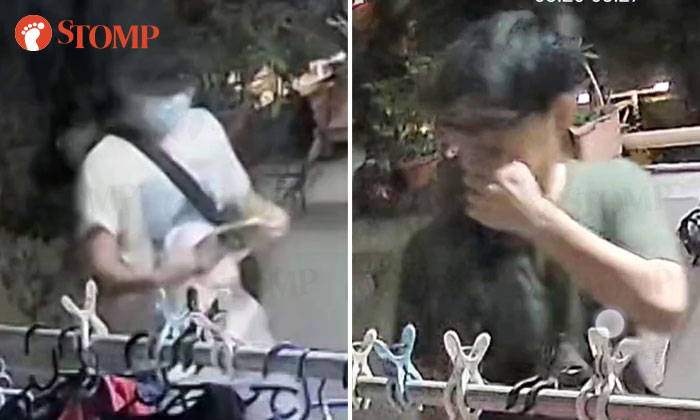 The man has been arrested for stealing underwear in a series of cases at Bedok and Tampines.

A Tampines resident is growing increasingly concerned after repeatedly spotting a man loitering outside her home and taking her laundry items, including bras and panties.

Stomper Ariel alerted Stomp to the incidents and shared closed-circuit television footage taken from a camera outside her unit at Tampines Street 82 in November and December last year.

On Nov 25, 2019 at about 4am, the man was seen wearing a face mask and taking a bra from the laundry rack outside Ariel's home.

A short while later, he is seen returning and putting the bra back on the hanger before leaving again.

On Dec 8, 2019, the same man is seen outside Ariel's home again, this time covering his mouth with his hand.

He crouches down and takes a bra and another clothing item from the rack and leaves.

"This man has been stealing bras, panties and even female clothing such as blouses, skirts, shorts and dresses from households here," the Stomper said.

"This serial underwear thief knows no limits to his criminal and perverted actions.

"He is seen expertly removing the underwear from the hangers, putting the hangers back to their original places, and then casually walking away with the stolen property in hand.

"On some occasions, he swipes one of the bras he takes a liking to and disappears mysteriously to the stairwell of the block.

"After some time, he struts back with the bra in hand, and carefully puts it back onto the clothing rack.

"What he did with the lingerie will remain unknown until he is brought to justice.

"This is an utterly disgusting act.

"Imagine how many times the owner of the undergarments has worn the exact same underwear he had tampered with, unbeknownst to where it had been, and what had been done with it.

"If anyone recognises him, please report to the police immediately!"

Her family then had a CCTV camera installed to understand what was happening.

They have since stopped hanging their laundry outside their flat after reviewing the footage that caught the man in the act last year,

However, she said she still continues to see footage of the man loitering outside her home, most recently on Sunday (Mar 8) at about 3am.

She is concerned for her and her neighbour's safety and added that her neighbours have reported items taken from outside their homes as well.

She has since made a police report.