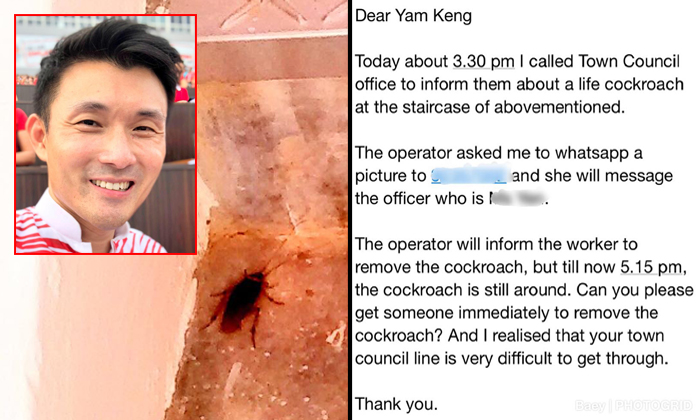 As Senior Parliamentary Secretary for Transport and Culture, Community and Youth, as well as Member of Parliament (MP) for Tampines GRC, Mr Baey Yam Keng is no doubt a busy man.

You might think an email about a lone cockroach sighting would probably be deemed trivial and go unnoticed by him -- but that's not the case.

In a Facebook post on Dec 11, Mr Baey shared how a resident had written to him about a live cockroach on a staircase.

The resident said that the cockroach was still there after nearly two hours of the Town Council being informed and asked for someone to come and remove it immediately.

Here is the email:

Today about 3.30pm I called Town Council Office to inform them about a life cockroach at the staircase of the abovementioned.

The operator asked me to whatsapp a picture to [number withheld] and she will message the officer who is [name withheld].

In his post, Mr Baey not only thanked the resident for "taking the trouble to get through the hotline and monitoring the whereabouts of the cockroach", but also acknowledged "bigger issues" to focus on after "reading between the lines".

The issues, according to him, are whether there was a cockroach infestation at the said location and how the town council could improve its hotline.

I received this email from a resident yesterday.
Reading between the lines, I know these are the bigger issues I should...

While a netizen called the issue an "inane complaint", many others sympathised with the resident who had provided the feedback.

Meanwhile, others praised Mr Baey for showing a sense of responsibility and being proactive.