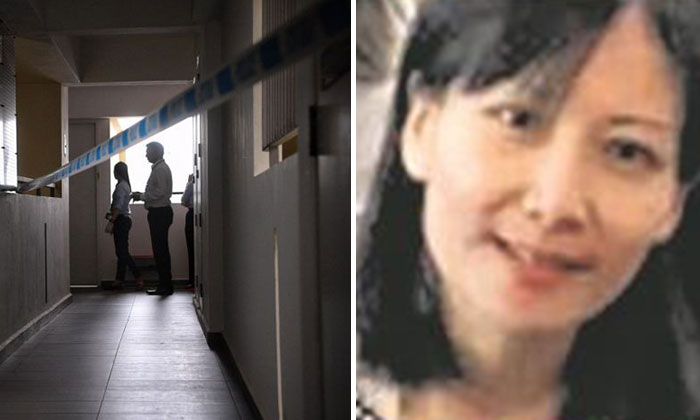 A man stabbed his former girlfriend to death in her home before jumping to his death from the 10th-floor flat at Block 520A, Tampines Central 8, the State Coroner concluded on Monday (Feb 26).

The bloodcurdling incident which happened on May 29, 2017, saw safety supervisor Chng Hong Nam, a married father-of-three, stab sales telemarketer Serinn Tan Bee Leng in her chest and abdomen, killing her.

He had called her repeatedly to attempt to schedule a meeting since the affair between the two ended in early 2017, reports The Straits Times.

Mr Chng’s wife found out about the affair, told her husband to end it and went to confront Ms Tan over at her home.

Ms Tan denied that she was in a relationship with him.

She has a son now aged 16, and after her fling with Mr Chng ended, moved on to another married man, her supervisor at work.

Mr Chng persisted in calling her and asking to meet,  but she would make up excuses to avoid him.

Ms Tan finally gave in and the two met at her home.

Senior Investigation Officer Vicneswaran Ramakrishnan said during a court hearing on Dec 19, 2017, that Mr Chng was discovered dead at the foot of the block at around 11pm on the day of the incident.

She ported several injuries, including a stab wound in her chest and two in her abdomen, along with bruises around her wrists and ankles.

Ms Tan also had lacerations on her forearms, which are believed to be defensive wounds inflicted when Mr Chng attacked her with a “knife-like weapon”.

The murder weapon is yet to be found.

Senior Investigation Officer Vicneswaran said that Mr Chng could have restrained Ms Tan with cable ties, which were also found at the foot of the block.

Before leaping to his death, Mr Chng sent a text message to his wife, apologising to his family.

He admitted that he was “not a good father”.

State Coroner Kamala Ponnampalam said that Ms Tan was pronounced dead around 12.30am on May 30, 2017.

She added that Mr Chng had committed suicide after the “unlawful killing” of Ms Tan.

Her father, 72, who attended the coroner’s hearing with his wife told reporters that his daughter had been living with them before moving into the Tampines flat with her son.

"She was the sole breadwinner for our household and was a very filial daughter. She had just moved into her new home when the tragedy happened."

He added that his grandson is now staying with them, and the boy who is now in secondary school still cries when he thinks of his mother.

“I have to stay strong for my grandson."

Related Stories
Malaysian boy fatally stabs father in the chest after discovering that he was having an affair
Volkswagen driver dies after attack by 4 men at JB petrol kiosk: He was stabbed, mowed down twice
Indian woman disfigures lover to disguise him as dead husband, says plan was inspired by movie plot
Marsiling Lane double deaths: Jaded lover had struck fatal blow on victim's head with dumbbell
More About:
tragic
affair
murder
death
stabbing