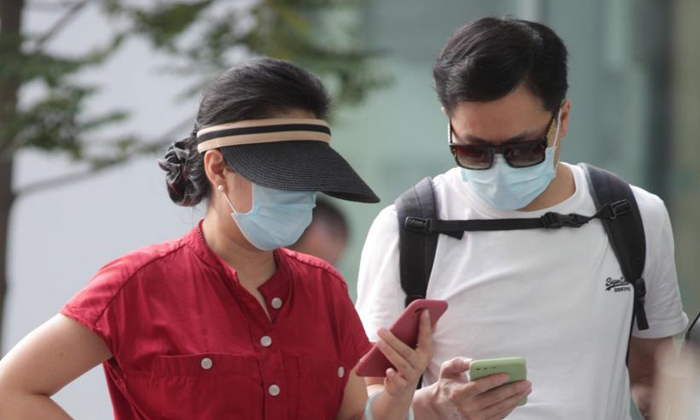 A woman accused of withholding information from a contact tracer on the whereabouts and activities of her husband, who tested positive for Covid-19, said she had difficulty communicating with the officer.

Chinese national Shi Sha testified in court on Thursday (July 8) that she felt that the conversation in Mandarin between her and the contact tracer was like "a chicken talking to a duck".

Shi, 37, and her husband, Hu Jun, 39, are each contesting one charge of withholding information from a contact tracer on Hu's whereabouts and activities between Jan 22 and 29 last year.

Hu had tested positive for Covid-19 on Jan 31 last year after he arrived in Singapore from Wuhan, China, which was the epicentre of the coronavirus outbreak at that time.

He had flown in on Jan 22 for Chinese New Year celebrations with his family, who was already here.

Hu was hospitalised and discharged on Feb 19 after he recovered.

The court had earlier heard that the couple gave differing accounts of their activities between Jan 22 and 29 to various contact tracers.

Speaking through a Mandarin interpreter, Shi disputed the testimony of contact tracer Georgina Lim, who had spoken to her over the phone.

Ms Lim told the court that Shi said she had queued at a taxi stand with her husband after picking him up from the airport.

But Shi said on Thursday that it was "impossible" for her to have told Ms Lim that. She had recounted in an earlier part of her testimony that she had hired a minibus instead to transport her husband as well as two friends and their family members who arrived on the same flight.

Shi said she had tried "very hard" to understand what Ms Lim was trying to say, noting that the words and phrases, as well as their sequence, used by the contact tracer were "a bit" confusing.

She did not know what she had done wrong, Shi said, adding that she and her husband had gone to the hospital of their own accord and had treated every phone call from the Ministry of Health seriously.

Hu and Shi were charged on Feb 28 last year, with their trial beginning on Aug 17.

After court proceedings were adjourned, they sought permission from the lower courts in October to travel to China and return in January this year when the trial was slated to resume.

Hu had earlier taken the stand to testify in January.

Shi is expected to continue her testimony on Friday.

If found guilty, Shi and Hu can each be jailed up to six months or fined up to $10,000, or both for each offence.