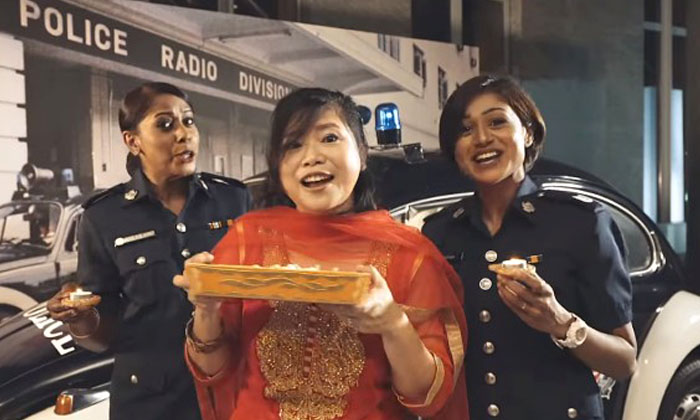 The Singapore Police Force (SPF) wished netizens a happy Deepavali in a remix of a festive song performed by their own officers.

They include officers from the SPF band and various police vocations, such as the emergency response team and investigation officers.

Deepavali, which fell on Nov 7, is a Hindu holiday celebrated on the 15th day of Kartik on the Hindu lunar calendar.

It is also known as the Festival of Lights, meant to mark the triumph of good over evil.

The two-and-a-half minute video of singing and dancing was posted on SPF's Facebook page on Nov 5.

The original music was credited to Mediacorp Vasantham and Mr Vicknesh Saravanan, who composed the song.

According to The Straits Times, the police said that the video was made fully in-house and no external vendors were engaged for the production.

The video was pitched in September and took a few weeks to plan, record and produce.

Filming took place over a period of two nights, involving 30 to 40 officers mostly from the police band.

The video starts with scenes of decoration and a female officer singing.

The video is filled with dancing, singing and various instruments including trumpets and bagpipes.

The video includes subtitles so that non-Tamil speaking viewers can enjoy its meaning too.

The video ends with the instrumentalists and dancers coming together to perform the song at night.

Netizens reacted by praising SPF for their many talented officers and they wished each other a happy Deepavali in the comments section.

Facebook user Prasakthi Allagoo was one of the netizens who praised SPF for their talent.

Facebook user Sofian Jaafar was happy to see the creativity showcased in the video.

Facebook users Erwin G Genason and Victor Soo both gave them score of 10 out of 10 by posting a gif of Bruno Mars, holding a up a scorecard with a 10.

Facebook user Dieing Rose said: "It was a very beautiful performance by you guys."

A police spokesman added that videos show that the police force are part of the community and they celebrate the same holidays as everyone else. For now, there are no plans for future videos.

Related Stories
Netizens amazed by SPF's special rendition of Selamat Hari Raya
First April's Fool, now Rendangate: 'Someone please give an award to SCDF's social media team'
Nobody celebrates the end of the week better than the SCDF
More About:
Deepavali
police
celebration