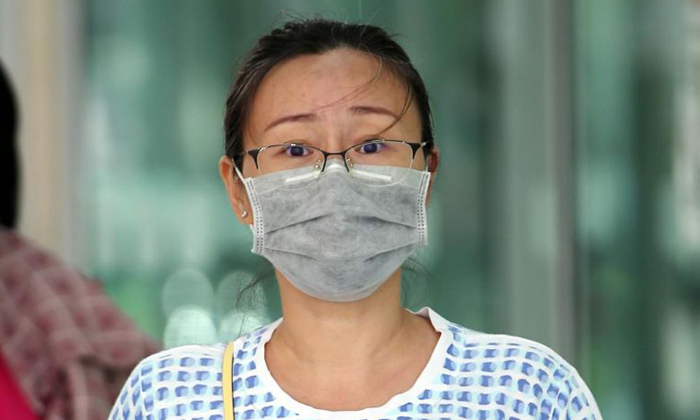 A Taiwanese woman, who purposely sneezed at a security guard after she was denied entry into Ion Orchard shopping mall amid the Covid-19 outbreak in April, was sentenced on Thursday (Sept 10) to 11 weeks imprisonment.

After sneezing at the guard, Sun Szu-Yen, 46, said: “You get it? You get it already!” She then took her passport out of her bag and added: “I am China. I am Taiwan.”

Sun, who was in Singapore on a long-term pass, pleaded guilty in a district court in June to one count of performing a rash act and an unrelated harassment charge.

After Sun admitted to the offences, the judge called for her to be assessed for a mandatory treatment order (MTO), where offenders receive treatment for their mental condition in lieu of jail time.

But she was not found to be suffering from any mental illness.

DROs are administered by the Singapore Prison Service. Offenders have to report to a day reporting centre for monitoring and counselling, and will need to undergo rehabilitation.

The judge noted that the DRO and CSO were also not recommended for Sun as she lacks family support.

The sneezing incident happened on April 12. The court heard that security guard Devika Rani Muthu Krishnan, 56, was deployed to one of the entrances of Ion Orchard at Lift Lobby A on the fifth storey of the mall.

One of the Singaporean's duties was to ensure that shoppers' particulars were recorded on a form for contact tracing. She also had to ensure that they wore masks before entering the mall.

Sun, who was not wearing a mask, arrived at about 12.40pm and filled out a form.

Deputy Public Prosecutor Deborah Lee had earlier said: "The victim reminded the accused to wear a mask before entering the mall. However, the accused used her scarf to wrap around her mouth instead.

"When the victim did not allow the accused entry into the mall, the accused pulled another scarf out of her bag and indicated that she wanted to use it as a mask."

Sun then sneezed in Ms Devika Rani's direction when the security guard refused to let her pass. The Taiwanese took the form and scribbled on it to blot out her particulars.

When Ms Devika Rani tried to stop her, Sun told her to "shut up" and added: "Do your work."

A closed-circuit television camera captured the incident. Sun left the premises soon after.

Separately, the court heard that at about 10pm on June 4 last year, Sun felt "stressed and frustrated" while at home in her third-storey condominium unit near Bukit Timah Road. No reason was mentioned for what caused her to feel that way.

To vent her frustration , she picked up several items, including a vacuum cleaner and a glass bottle, and flung them out of a window. A security guard at the property alerted the police after she refused to calm down.

Sun, who was unrepresented, told the court on Thursday that she would like to remain in Singapore where her son is attending school.

For performing a rash act, Sun, who represented herself in court, could have been jailed for up to six months and fined up to $2,500.