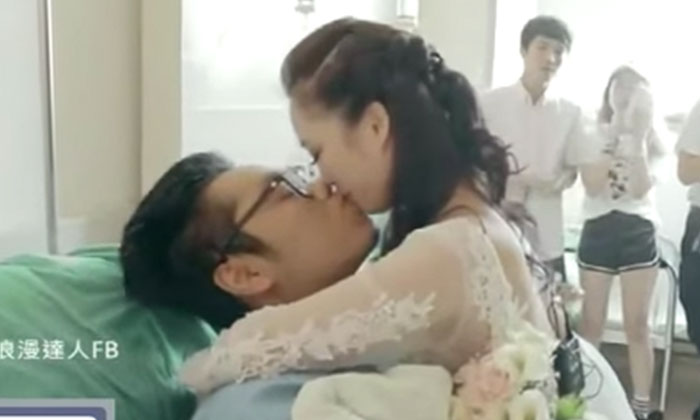 A Taiwanese man broke up with his girlfriend after finding out that he may have to undergo amputation following a serious traffic accident --- only for her to propose to him instead.

The man had previously proposed to her and the couple had intended to get married the following year in 2018, reports Shanghaiist.

However, after the accident, the man found out that treatment would likely involve amputation for him.

He then suggested the breakup as he was afraid of being a burden to her.

However, the woman had something different in mind.

Carrying a bouquet of flowers and clad in a wedding dress, she burst into his hospital room in New Taipei City.

In front of a group of friends, she asked:

“If you will take me as your wife, then will you accept these flowers?”

“I will do everything I can to get better, and keep hold of your hand for the rest of my life.”

He then proceeded to wrap his arms around her and kissed her.

For cynics out there who don’t believe in true love, here’s your evidence.

Related Stories
Malaysian tycoon's daughter renounces $407 million inheritance to marry for love
Unlikely lovers? Check out this love story between American teacher and Chinese farmer
Wedding guests in tears after groom addresses bride -- and says he loves someone else
Minister Vivian Balakrishnan on what happiness is all about after 30 years of marriage
More About:
love
relationship
Taiwan
touching