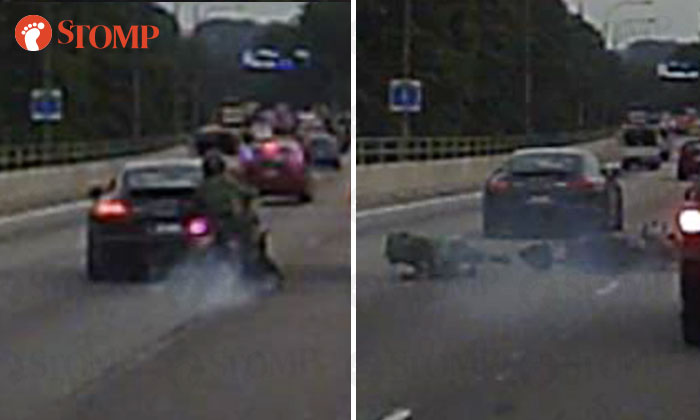 A National Service (NS) man on a motorcycle was flung onto the road after an accident with a black Porsche which was tailgating another vehicle along the Seletar Expressway (SLE) today (Aug 30) at 7.18am.

Stomper Mike captured the incident on his vehicle’s dashboard camera, and sent the video to Stomp.

In the video, the NS man was seen riding in the middle lane and overtaking a yellow car.

The Porsche, which was tailgating another vehicle in the rightmost lane, suddenly cut into the middle lane without signalling, causing the NS man to crash into it.

The NS man was flung onto the road, while the Porsche driver simply drove on.

Fortunately, the yellow car which was just behind the motorbike managed to stop in time, and avoid running over the NS man.

Two other motorcyclists who were passing by stopped to render assistance.

Fortunately, the NS man did not seem seriously injured and got to his feet after a while.

One of the riders helped lift the NS man’s motorcycle.

The rider also helped to move the NS man's motorcycle to the side of the road.

Said Mike: "I’m not sure if the Porsche driver knew he caused an accident. Given the way that he was driving earlier, he didn’t seem like the sort who would wait around.

"I am pleased that the NS man was fine. It was quite fortunate and he could have been killed."

In response to Stomp's query, a Police spokesman said:

"The police is aware of the incident and would like to advise anyone with information to lodge a police report at any Neighbourhood Police Centre/ Post (NPC/NPP) or via our Electronic Police Centre (ePC) so that we can look into the matter,

"Alternatively, you can submit further information via the 'E-FEEDBACK ON ROAD USERS' portal."

Related Stories
Tow truck driver goes against traffic at East Coast Service Rd despite passing vehicles honking at him
Taxi beats red light and crashes into Toyota
Reckless driver ‘chiongs’ ahead and beats red light -- with no regard to the safety of others
More About:
errant driver
porsche
SLE
accident
motorcycle
motorcyclist