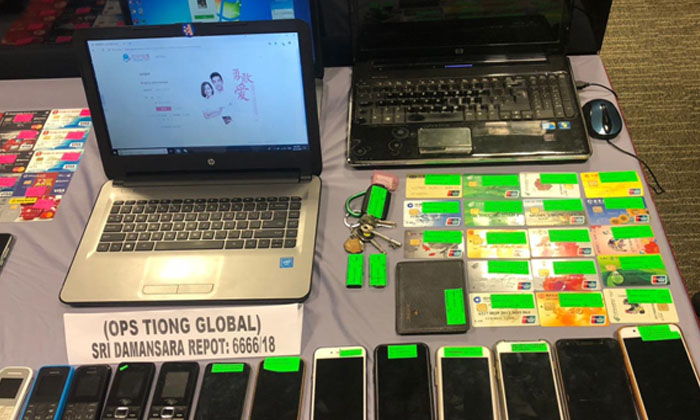 Nineteen people were arrested from Oct 19 to Oct 21 for their suspected involvement in at least 146 cases of internet love scams reported in Singapore, Malaysia and Hong Kong.

Out of the 19 people arrested, there were 15 Malaysian women, a Malaysian man, two Nigerian men and one woman from China.

Officers from the Commercial Affairs Department (CAD) of the Singapore Police Force, Commercial Crime Investigation Department (CCID) of the Royal Malaysia Police and Cyber Security and Technology Crime Bureau (CSTCB) of the Hong Kong Police Force had been sharing information regarding the cases since early 2018.

Through ground enquiries, the syndicate was believed to be operating from Malaysia.

Two Malaysian women, aged 40 and 48, are assisting with investigations in Singapore as they are believed to have assisted in transferring criminal proceeds linked to the internet love scams.

Several telecommunication devices, laptops and ATM cards were seized in the operation.

The total amount involved in these internet love scams amount to about $19.45 million.

Eight internet love scam cases reported in Singapore, involving at least $450,000, have been solved as a result of the joint operation.

Director CAD, Mr David Chew said: “The fact that victims in Malaysia, Hong Kong and Singapore fell prey to the same scammers shows that the criminal networks behind the scams are sophisticated and transnational.

"To tackle these syndicates, international cooperation among law enforcement agencies is extremely critical.”

To avoid falling prey to these scams, the police advise members of the public to be careful when befriending strangers online.

They should also be wary when being asked to send money to people whom they do not know.

Related Stories
Woman wanting to borrow $3k gets $500 from moneylender -- but ends up forking out $2.6k
Mum of 7 masterminded $1.8 million renovation scam -- a month after being released from jail
Collector pays Carousell user $1,505 for over 50 dolls -- that she never received
More About:
scam
arrest
jailed
love scam