Swensen's thanks customer for FB post, 'touched by patience and kindness towards staff' 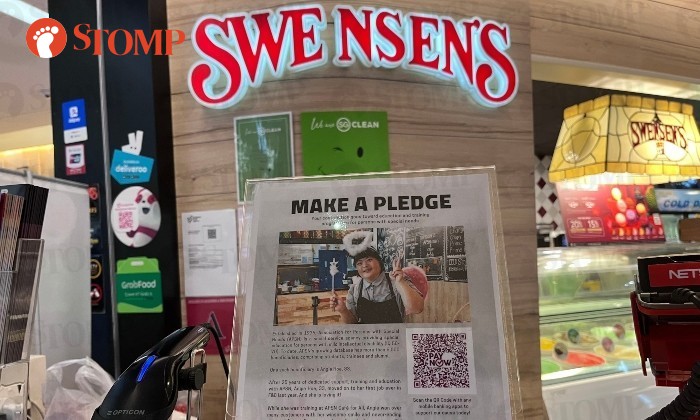 Restaurant chain Swensen's has thanked a customer for her viral Facebook post about the restaurant hiring people with special needs and how we should support them.

Facebook user Sindhu RK Johnson posted on Aug 8 about her experience at the Clementi Mall outlet of Swensen's with her three-year-old son.

She wrote: "So when a table was ready, a waitress called us both in, not ushered in but hand-gestured like you know how you call a cat and pointed us to the table at the corner."

Sindhu also said that when she told the waitress that the table was wet, the waitress "literally bent down to the surface of the table to look and then looked at me in a judgmental way and went to get a soaking wet towel to make it even worse".

She also described having difficulty getting a high chair for her son and redeeming a free drink coupon with her app. The last straw was not getting any cutlery with the food.

So she went to complain to the manager.

Sindhu wrote in her post: "I started voicing my grievances and the manager oh so patiently heard me out. And then when I stopped, what he said next broke my heart.

"Ninety per cent of the staff there were teenagers with autism from the APSN school."

APSN stands for Association For Persons with Special Needs.

She continued: "I profusely apologised to the manager and conveyed my suggestion to at least make it known to patrons like what KFC does. Not a badge on them but some sign before (the patrons) enter the restaurant.

"And like what I suspected, Google reviews on Swensen's were brutal.

"I'm writing this to just make known how wonderful it is for Swensen's to be inclusive and give an opportunity but also be patient with the servers. And do support them and not boycott due to poor service if you ever had any. It isn't intentional.

"I also would like to give a shout-out to the manager managing everything. It really isn't easy.

"And please don't jump the gun too quickly like myself."

Two days later, Swensen's commented on her post: "Dear Sindhu RK Johnson, thank you for taking the time to write this post, we are extremely touched by your patience and kindness towards our staff. We will strive to continue to provide great food and service!"

Sindhu replied: "Thank you, Swensen's, I hope none of your staff were penalised from my sharing." 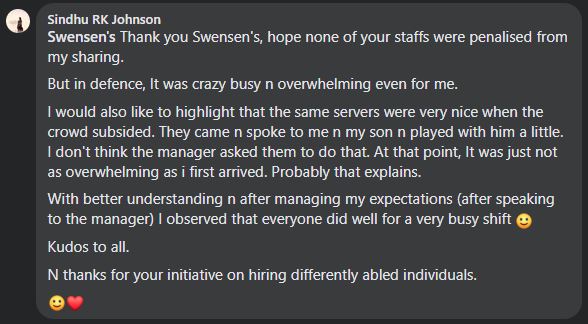 When Stomp visited the Swensen's outlet at Clementi Mall on Saturday (Aug 13) at 5.30pm, there were no signs at the entrance to inform patrons that the restaurant hires people with special needs, as mentioned by Sindhu.

However, there was a small sign on the cashier's counter near the entrance asking for donations to APSN. 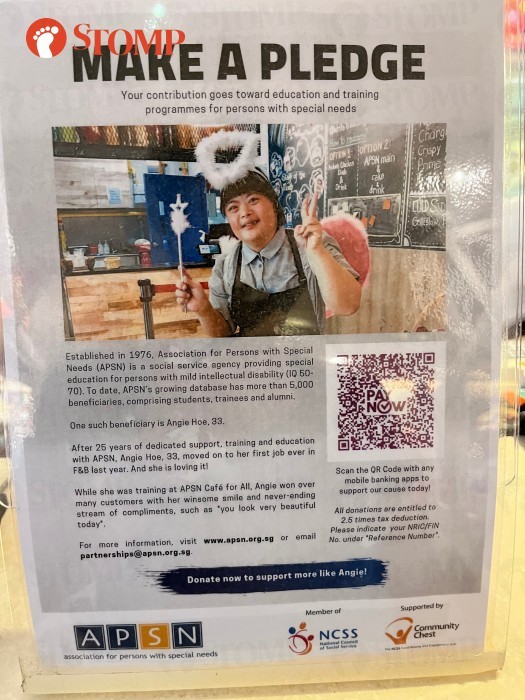