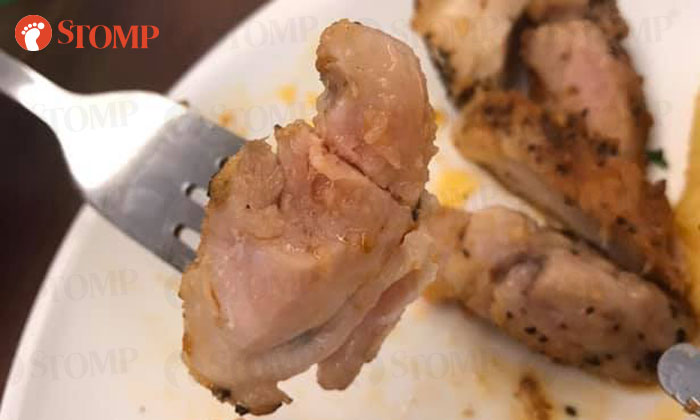 Swensen's told Stomp it is sorry for the unpleasant experience a customer received at its Plaza Singapura outlet after she was allegedly served raw chicken.

Stomper Shervella informed Stomp that she had visited the restaurant with her friends on Oct 19 after 3pm.

She had ordered the Sambal Butter Chicken and had eaten half of it before realising something was not right.

"I immediately cut it into smaller chunks to see if it was me or was it the chicken," she said.

"It was pinkish and extremely raw.

"I would understand if the chicken was thick and it was not cooked evenly but it was raw.

She said she informed the restaurant's staff about it and her plate was taken back. She also told them to void her meal from the bill, which they did.

"We still paid for the rest of the food which amounted to about $60," she said.

Later that night, she experienced a stomachache and vomited.

She subsequently visited a doctor and paid $122 for medical treatment.

She told Stomp she emailed Swensen's on Oct 24 to ask them to reimburse her doctor fees and received a response on Oct 29.

"They said they will only provide me with a $10 Swensen's voucher and not reimburse the doctor's bill," she said.

"That's basically as good as nothing because if this happened to you, would you go back and dine there?"

She added that Swensen's told her they had investigated the incident and found no other diner who ordered the same dish that day had experienced the same issue.

She asked, "If they cooked the chicken individually, why was mine raw?

"Why would other diners have similar feedback if the chicken was only served to me unless they cooked it in mass?

"How many customers ordered the same dish as me that day for them to conclude that there was 'no feedback of the same issue'?

"Also, why would they have feedback on the same plate of food that was served to me?

"I won’t want to eat at Swensen's anymore even they provide lifetime free meals."

In response to a Stomp query, a spokesman from Swensen's issued the following response:

"We are aware of the incident raised by Miss Shervella Wong and would like to assure Miss Wong and all our customers alike that Swensen’s takes our customers’ feedback very seriously.

"Food hygiene, handling and safety are also of top priority at all our restaurants.

"We apologise once again for the unpleasant experience and that our response has been unsatisfactory.

"We continue to implement and uphold the highest food safety standards at our restaurants and will work on serving our customers better."