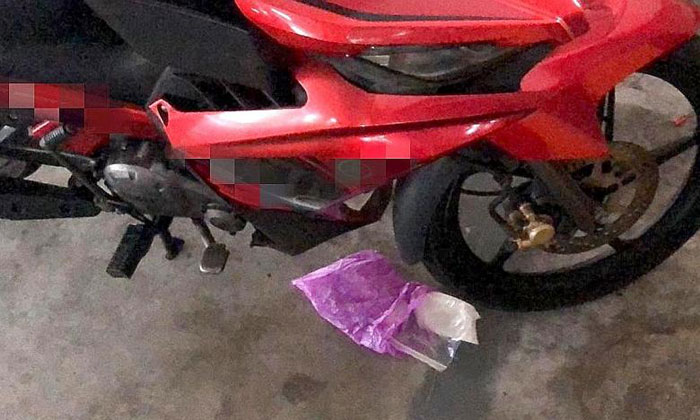 He had allegedly disposed of a plastic bag in a carpark in the vicinity of Orchard Towers before hopping onto his motorcycle to escape.

But the 21-year-old Malaysian was spotted by Central Narcotics Bureau (CNB) officers and was arrested at the junction of Shenton Way and Maxwell Road last Thursday morning.

The plastic bag, recovered at the scene, was found to contain 336g of Ice, a common name for methamphetamine.

Worth more than $33,000, this amount can feed the addiction of about 192 abusers for a week, CNB said in a statement on Saturday.

Three other suspected drug offenders were also arrested on Thursday last week in separate locations around Orchard Towers and the International Building. This included a 30-year-old Singaporean man, and a total of $13,390 was seized from him and the Malaysian suspect who tried to flee.

They were among the 192 suspected drug offenders nabbed in an islandwide CNB anti-drug enforcement operation between July 22 and Aug 2.

More than $65,000 worth of drugs were seized during the blitz, which was supported by the Singapore Police Force and covered areas including Bedok, Bukit Merah, Choa Chu Kang, Hougang, Punggol, Sembawang, Tampines, Telok Blangah and Yishun.