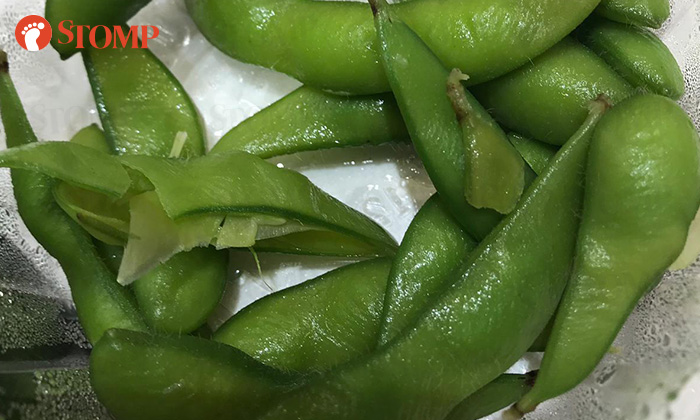 Sushi Express has responded to an incident where a customer found 'cracked' edamame while dining at its Waterway Point location on Sunday afternoon (Aug 18).

Stomper Q contributed photos of the incident which occurred at around 5pm.

She told Stomp: "When I took the edamame, there was like some edamame skin torn off. I didn't really care much initially, so I continued with my meal.

"After a while when I was almost halfway through the bowl, I noticed more edamame skin. I looked carefully and it somehow looked like someone had bitten it and placed it back onto the conveyer belt.

"I called one of the waitresses immediately. Surprisingly, she told me: 'Ooops, sorry it should be a prank. This is not the first time we discover such an incident.'

"I wondered: 'What, not the first time?' The waitress did ask me if I wanted a new one but I didn't feel like eating anymore. I was so disgusted.

"The waitresses reported this to the restaurant manager, who then came and asked me for more details. I explained these to him but he simply said that it's because the edamame was soaked in water for long hours, so it'll appear cracked like in the photo.

"I argued that it's impossible because it didn't look like what he had explained. Instead, it looked more like someone had bitten it or peeled it.

"I was so worried after that. My concern is what if someone had really bitten it and this person had health issues. Would I get affected?"

In response to a Stomp query, a Sushi Express spokesman said: "Thanks for the feedback in regards to the 'cracked' edamame.

"It is indeed common that such items appear with crack or broken due to storage and handling.

"As for the server's reply, she means that it is common to find cracked or broken edamame.

"Please be assured that it is not partly consumed by anyone, it is our duty to ensure and serve safe food.

"The staff will be reminded to focus on presentation, removing the undesirable-looking items when portioning."

Related Stories
Diners horrified after "U-shaped white stuff" turns out to be "50 to 100 worms" in Seng Kee mee sua
Balestier restaurant apologises after customer finds mice on sticky trap behind him while eating
Giant Supermarket responds after customer finds "something white and moving" in dragonfruit
More About:
food safety
disgusting
food
unhygienic