Surely there's a better way to transport this car than using a pick-up truck? 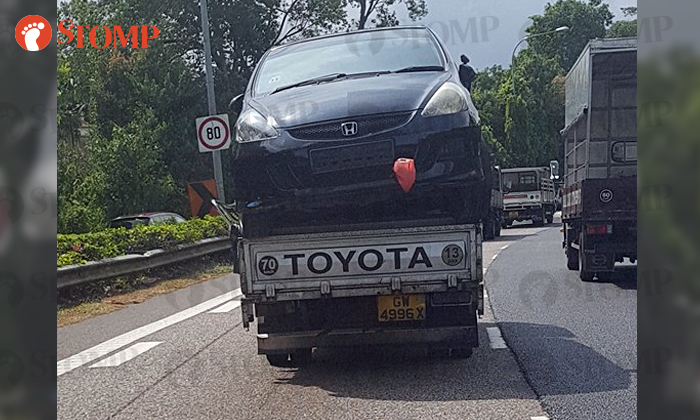 Stomper Vespa was concerned to see a Honda car being transported on the back of a pick-up truck along the Pan-Island Expressway (PIE) towards Tuas yesterday (March 1), at around 1pm.

Instead of being attached to a proper tow truck, the car had been placed on the back of the lorry.

Vespa said: "I don't think this is the way to tow a car. Don't you guys think so?

"It makes me feel unsafe as the car might just slide down and I'm right behind."

In a similar incident in March last year, a Peugeot was spotted 'hitching' a ride on the back of a pick-up truck along Kaki Bukit Avenue 3.

The chairman of the Singapore Road Safety Council (SRSC) had commented on the incident, citing that the behaviour was very dangerous and could have caused an accident.

"Using a small lorry like that is against the regulations," he said.

"The weight of the car was certainly over the limits, and if an accident occurred, the consequences could be severe."

Related Stories
It's a bird, it's a plane... no it's a flying mattress spotted on PIE
Peugeot 'hitches ride' on lorry's back at Kaki Bukit Ave 3: Car was unsteady with two wheels dangling outside
More About:
dangerous
safety
lorry
transporting