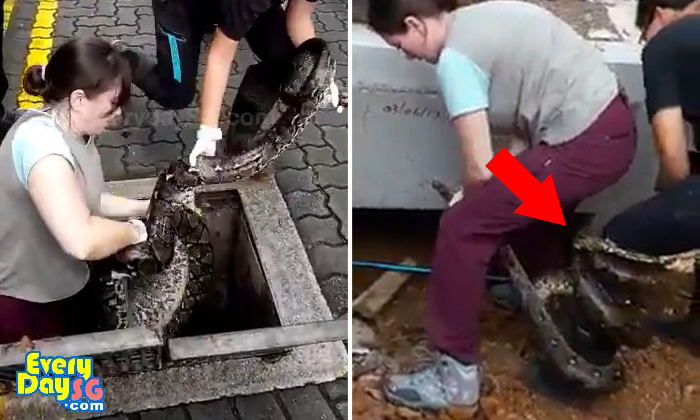 Two large pythons measuring two to three metres long were rescued from a drain and a worksite, both on Oct 9.

Videos of both rescue operations, the first occurring in Jurong and the second happening in Bukit Batok, were posted on Facebook by Everyday SG.

Two women, an Acres (Animal Concerns Research and Education Society) officer and a volunteer, appeared to be the ones primarily involved in the two rescue missions.

The officer has been identified as 24-year-old Ms Carmen Choong while the volunteer is known only as Rebecca.

In the first video, a huge python with a protruding belly can be seen being fished out from a drain by the two women, who then placed it into a container.

"The python from the drain had eaten something. We can only conclude from X-rays but typically, the animal should be a cat," Mr Kalai Vanan, Acres' deputy chief executive officer, told The Straits Times.

The second video shows another python being retrieved from a worksite.

This particular creature proved to be more of a handful, coiling around the leg and arm of both Ms Choong and Ms Rebecca respectively.

However, they eventually managed to subdue the animal and placed it into a sack.

Netizens have been full of praise for the two women, commending them for a job well done.

"My utmost salute to them," wrote one user.

Both snakes were released back into the wild after being microchipped at the zoo.

Ms Choong, who handles snakes "once or twice per day" as part of her normal routine, told The Straits Times: "Most people will be afraid but for me I like snakes and have liked them since I was young."

The James Cook University graduate has a degree in Business and Environmental Science, but chose to volunteer with Acres as she wanted to work with wildlife.

She took on a full-time job with them after volunteering