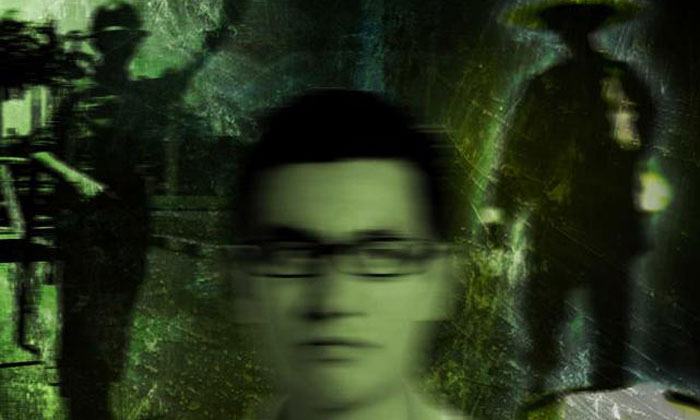 He's seen British soldiers dressed in World War II-era fatigues complete with nametags and even once spoke to a 19th Century Chinese coolie who asked him repeatedly what year it was.

The only thing is that the "people" Mr Sam Chen (not his real name), 26, sees on a daily basis are all dead - even if they don't know it yet.

Born with the "third eye", Mr Chen, who works as an importation manager, said: "When I was young, I didn't realise these people were non-corporeal beings wandering around because to me, they were always just normal people.

"But I always wondered why these normal people acted a bit strange - they had no expression, showed no emotions and always wanted to talk to me and never anyone else around me."

When he was a child, he would ask his mother about what he saw but she repeatedly told him that it was his imagination and to ignore it. It was only in his early teens that she finally came clean and told him that what he had been seeing were the spirits of the departed.

His "gift" as he found out, was not exclusive to himself either - both his mother and his older sister share the ability as well.

When AsiaOne interviewed Mr Chen recently, he pointed to various spots along a row of old shophouses in Thomson Road.

Mr Chen said: "There's one squatting by the drain over there and another one leaning against that air-con compressor having a cigarette."

If that isn't enough to send chills running down one's spine, he later looked at a crowd of Pokemon Go players crowding at a park in Bishan and nonchalantly remarked: "They (the spirits) are standing right next to those Pokemon Go players and they don't even realise it."

Mr Chen said that he sees larger numbers of spirits roaming the streets during this time of the year although he cannot explain why.

"I wouldn't say it only happens on the seventh month, but cultures around the world celebrate festivals that revolve around the dead around this time of the year too," he said.

For instance, the Mexicans celebrate the Day of The Dead in October, the Japanese celebrate Obon between July and August

"I think there must be some reason for that happening."

Mr Chen said: "There is a higher chance that you might run into an occurrence that might make you feel uncomfortable."

They also tend to "take residence" in homes, usually older ones, but for the most part, these spirits are benevolent and actually look after the houses and its occupants.

Mr Chen, who is a Catholic, gave AsiaOne some tips for the living to note during the Hungry Ghost Festival which ends on Aug 31.

1. Don't kick offerings, urinate in public or do anything silly

"During the period, there are more of them walking around so there is less real estate for people to be standing around. Don't do anything silly like kicking over offerings. They might be squatting or leaning by a drain and because of the sheer amount of real estate that's taken up by people, you're bound to run into one more readily."

"Don't get too sad or angry during this period because you become more susceptible to harm and chances of mishaps could be higher. Most spirits are benign and they are just trying to get by in the afterlife. But there are spirits that are vicious and vindictive and they could have been really nasty people in life. They don't necessarily reach out and strangle you or throw you off a building."

3. If you notice anything strange, just ignore it.

"If you hear anything strange, someone calling your name, someone pulling your hair or shoulder, just ignore it. I get that all the time. They reach out to me and try to physically restrain me or hold me. For the most part, I just ignore it but when I do tell them to bugger off, I do tell them that if they really need my help with something, to just talk to me and not cause me any problems. You can't see them. So if they do that to you, it's difficult for you to assess the situation and know what to do. The best things to do is to ignore it and walk away."

"Sometimes they move from place to place and I've seen them catching lifts from cars and bicycles even. I don't know how they can sometimes traverse long distances in a short period of time. As far as I've seen, the door doesn't have to be open but they have to enter through some kind of a threshold (like a door). I've never seen one poking its head through a wall to say 'hello' to me. The day that happens, I will update this information for you."

5. If you have a feeling of dread, go with your instincts

"If your gut is telling you that something is a bad idea, you probably shouldn't do it. Your gut is your most important tool. Especially at this time of the year, if something makes you feel uncomfortable, and you know in your head that if you did this, something is going to happen to you, then don't do it. Don't take any chances whatsoever. This is the worst time of the year to tempt fate."