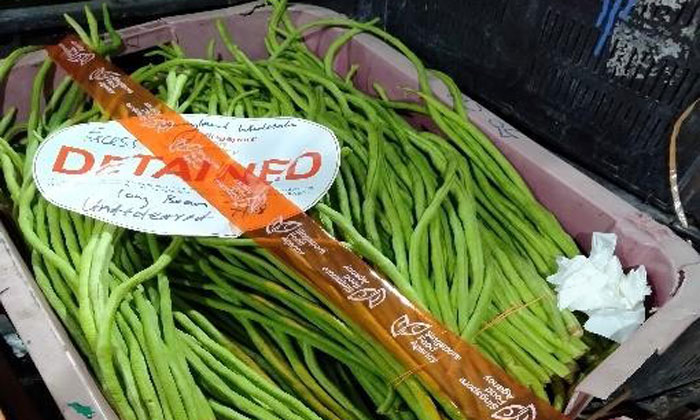 A company has been fined $8,000 for illegally importing fresh fruits, vegetables and processed food for sale the Singapore Food Agency (SFA) and Immigration and Checkpoints Authority (ICA) said in a statement on Wednesday (Nov 17).

In a joint operation conducted by the SFA and ICA on March 23, a truck carrying food produce consigned to Sunnyland Wholesale was detained by ICA officers at Woodlands Command.

The case was then referred to SFA for follow-up investigations.

Ng Kai Hong, the licensee of Sunnyland Wholesale, was found to have illegally imported about 1,756kg of undeclared and under-declared fresh fruits and vegetables.

All the illegal consignments were seized.

"Fruits and vegetables can only be imported by licensed importers, and every consignment must be declared and accompanied with a valid import permit.

"Illegally imported vegetables are of unknown sources and can pose a food safety risk, for example, if unregulated or high level of pesticides are used.

"The long-term ingestion of excessive pesticide residues through the consumption of vegetables that have been subjected to pesticide abuse could lead to adverse health effects."

Offenders who illegally import fresh fruits and vegetables can be fined up to $10,000 and/or face a jail term of up to three years.

Those who illegally import processed fruits and vegetables can be fined up to $1,000 and in the case of a subsequent conviction, fined up to $2,000.