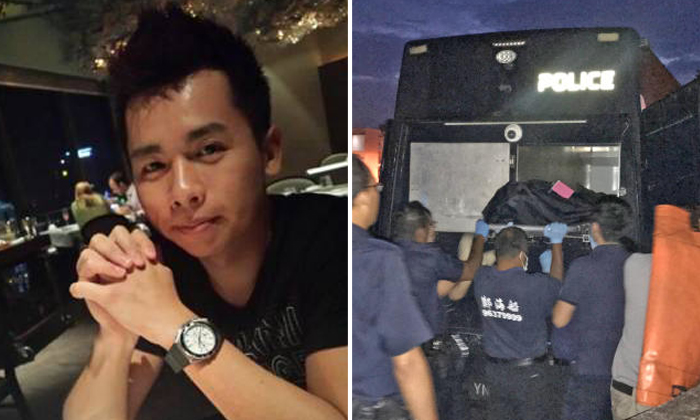 A man arrested on suspicion of murdering his boss with a chopper allegedly turned violent after he was fired for a second time, the victim's father told The Straits Times on Tuesday (March 12).

Mr Lin Xinjie, 30, was pronounced dead by paramedics at the International Furniture Centre in Sungei Kadut Loop at around 1pm on Monday.

The 23-year-old Malaysian suspect, who has not been named, had been working for him for around five years, most recently at an online retail company called Jiji Singapore .

Mr Lin's father, who did not give his name, spoke to reporters at the Singapore General Hospital mortuary and said that over the past couple of years, the suspect had developed a poor work ethic and would often skip work.

"He was given several warnings but he didn't listen. When he was fired the first time, he pleaded for a second chance and Xinjie gave in," he said. "But his poor work performance continued to affect the operations of the company and Xinjie decided to fire him the second time.

"That's when he returned with a chopper and attacked Xinjie."

As the attack happened during lunch hour, many people were not in the office, said Mr Lin’s father. “My son and his business partner usually have lunch late, so they were still in the office,” he added.

Jiji's other director, Mr Li Mingqiao, was also attacked by the employee. Mr Li was conscious when he was later taken to Khoo Teck Puat Hospital.

The employee, who is a work permit holder, was arrested for murder. He will be charged in court on Wednesday, police said.

Mr Lin’s father, who is in his 50s, added that he was notified of the incident by one of his son’s colleagues and rushed to the scene from his workplace in Tuas.

As the only son, Mr Lin was very filial and respectful towards his elders, many of whom reside in China, his father said. “Whenever we visit, he would bring along hongbao for them,” he added.

Mr Lin also often expressed his gratitude towards his parents on his social media accounts. In a photo posted of him with his parents posted in February last year, he wrote: “While pursuing happiness, people often forget the ones right beside them, providing them with unwavering love and support. In 2018, the 29-year-old me will work hard to give the best to the ones who truly love me.”

His father said that his son worked hard to develop Jiji, which he started in 2017.

By then, Mr Lin was a seasoned entrepreneur, having started at least eight other companies since 2011, according to records from the Accounting and Corporate Regulatory Authority.

“Even though he is only 30 years old, his company already has about 40 employees and is growing steadily. If he was not sick or overseas, he would always be at the office, even on the weekends,” he added.

Mr Lin was also focused on his career and did not have much time for dating.

“He had aspired to expand the company, but this happened,” said Mr Lin’s father, who broke down. “I don’t know how the company will continue without him.”