Sunbird makes nest on plant at condo balcony, resident on standby for eggs to hatch 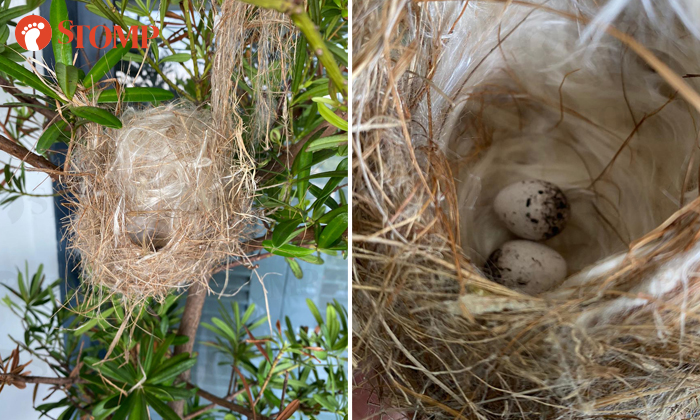 A resident is eagerly anticipating the arrival of two hatchlings after a sunbird built a nest on his balcony at D'Leedon condominium last month.

Stomper Mike said an olive-backed sunbird had built a nest on a plant at his balcony awhile back. However, he did not manage to photograph the animal.

Mike said: "Deforestation might be why sunbirds are making nests in corridors and balconies.

"The sunbird is very sensitive and flies away the minute it detects any human presence, so I couldn't take any pictures.

Mike received a pleasant surprise when the sunbird laid two eggs in its nest some time between March 29 and 31.

He told Stomp: "The bird returned after building the nest to lay her two eggs.

"I'm waiting for the eggs to hatch so that I can catch sight of the hatchlings. The incubation period is 10 to 14 days, so it should be anytime now.

"I've read a fair bit about sunbirds online, so I’m aware of its habits and know how to take care of its nest and hatchlings."

Asked how he felt about being privy to nature's wonder, Mike said: "I am elated! I feel like I’m contributing a small part to the preservation of wildlife of Singapore!

"Stomp readers, do await the next instalment which I will share when the hatchlings are here!"

More information on sunbirds can be found on the National Parks Board website.