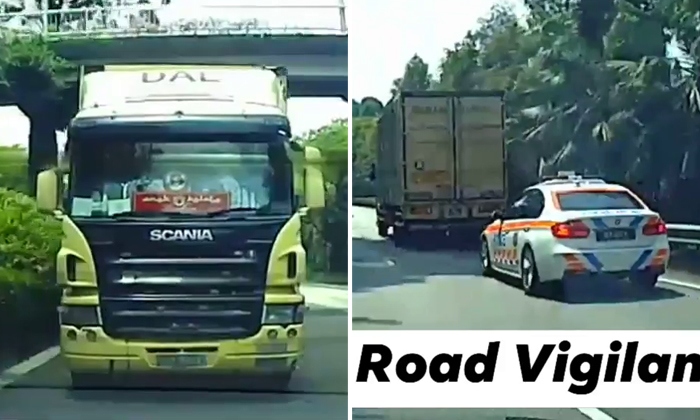 Summons action has been taken against the driver of a heavy vehicle who was caught occupying the rightmost lane while travelling along the Pan Island Expressway (PIE) on Monday (Feb 22).

A Traffic Police (TP) officer, who was conducting a routine patrol on expressways, had spotted the Malaysian-registered heavy vehicle​ occupying the extreme right lane while travelling on the PIE at around 2.30pm.

The police told Stomp in a statement: "The officer immediately sounded his vehicle’s horn and siren to alert the driver of the heavy vehicle, and directed him to switch to the left lane, which he did.

"Summons action was taken against the vehicle for failing to keep left."

A video posted by SG Road Vigilante on Facebook shows the heavy vehicle on the rightmost lane of the expressway and a police car behind it.

In their statement on Wednesday, the police also reminded heavy vehicles and slow-moving vehicles to keep to the left-hand side of the roads, unless overtaking.

"Failure to do so may constitute an offence of failing to keep left under section 5(1) of the Road Traffic Rules," they added.