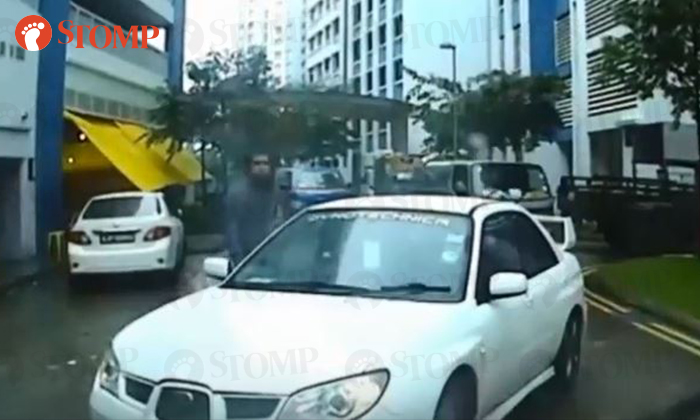 A driver held up traffic for at least three minutes by attempting to park in a loading bay at 261 Punggol Way.

On Jan 12 at around 12.30pm, Stomper Nicholas was entering the carpark when a white Subaru swerved into his lane, blocking his way.

In the nearly 4-minute long video that he posted on YouTube, the white Subaru can be seen blocking both lanes of the road, remaining stationary for nearly 2 minutes.

Nicholas told Stomp, "He claimed he was trying to park at the loading and unloading bay. I was waiting patiently for him to reversed and let me passed but he did not move and obstructed traffic flow as many cars were behind me started honking."

The driver is also then seen coming out of the Subaru.

According to Nicholas, the driver came out to ask him to reverse his car so as to allow him to park at the loading bay, to which he said that he was unable to do so as there was a car behind him.

After getting back into his car, the Subaru driver is then seen reversing and eventually parking his car at the loading bay.

Nicholas added, "He parked there for about 1 hour as I saw his car still parked in the loading and unloading bay after leaving the premises."

Related Stories
Driver blocks multiple cars at multi-storey carpark for over 1 minute
Car parked by the side, while people stand in middle of the road -- to play Pokemon Go
Driver stops car on road, blocks traffic and goes for leisurely stroll at Senja Rd
More About:
inconsiderate
parking