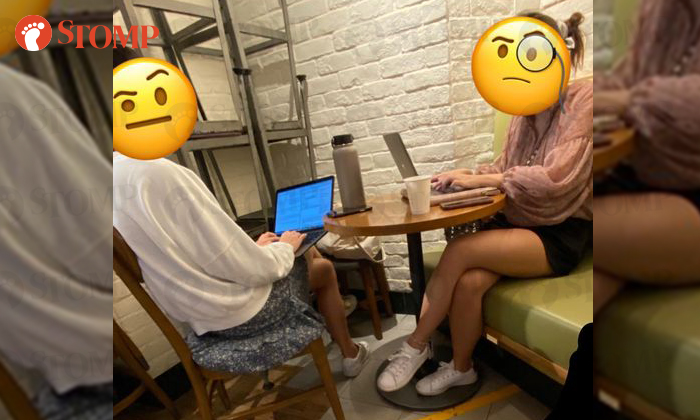 Two women were seen occupying a table at Starbucks cafe without ordering anything except for a cup of plain water.

She recounted: "These studious ladies came to Starbucks at around 10.35am, sat down at a table in a corner and continued with their studies/work without ordering anything.

"I spotted a Starbucks cup with water on their table and thought they had made their order and were just waiting for their breakfast.

"At 11.25am, an employee came and asked the women whether they had ordered anything. I could not hear what they said due to the low volume.

"After five to 10 minutes, both ladies left the premises.

"Kudos to the female employee who performed her duty by speaking to the women."

Asan said that while she could not hear the conversation between the two women and the staff member, the pair were at their table with just a cup of water for "almost one hour".

Plain water is free at Starbucks.

The Stomper added: "Sometimes, these people need to be mindful.

"Eateries and cafes like Starbucks, Coffee Bean and McDonald's are not places for you to study. Don't occupy the place for hours and hours with just a small cup of coffee, while using the facilities like wifi and power outlets.

"These places will lose business if we continue to act like this."

This is not the first time Stompers have observed people hogging seats at Starbucks outlets to study or do their work.

Other patrons have also been known to provide feedback on Starbucks' Facebook page. In these instances, Starbucks has responded to such complaints with the following response:

Check out more incidents of seat-hogging at Starbucks in the list of Related Stories below.

Related Stories
Stomper gives suggestion after complaints of students hogging seats in Starbucks outlets
Woman annoyed with students taking up seats at Bishan Starbucks during school holidays: "Stay home and study"
More customers frustrated by students studying at Starbucks outlets: "More like library than cafe"
Students hogging Starbucks seats: Woman asks "what do you want us to do about it?"
Customer enters CCK Starbucks and exits again: "Why do students have more rights than normal patrons?"
Girl complains about being asked to leave for studying at Starbucks... but gets burned by netizens
There's study area and library near Keat Hong CC -- but students choose to hog seats at Starbucks
Students 'hijack' customers' seats at Starbucks -- and hog them to study despite not buying anything
It may be the exam period, but is it right for you to hog tables like this?
More About:
inconsiderate
starbucks
studying