Students raise hands while crossing road... but have close call with driver who speeds past them 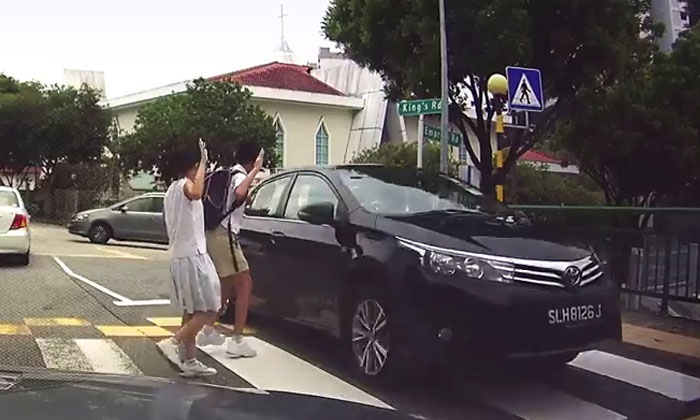 A driver was caught on video driving across a zebra crossing despite two young pedestrians being halfway across the road.

A Stomper alerted Stomp to the video that was posted in SG Road Vigilante's Facebook Group.

The incident occurred along King's Road and according to the timestamp on the video, it happened on Sep 10 at about 1.45pm.

In the video, two students who appear to be wearing uniforms from Nanyang Primary School are seen preparing to cross the road.

Member of the group slowed down her car as it approaches a pedestrian crossing along King’s Road, and it then came to a...

They look right before crossing and hold up their right hands to alert drivers to their presence.

However, just as they get halfway across, a black Toyota Corolla with licence plate number SLH8126J drives on without stopping, narrowly avoiding the students.

"Just half-a-second separated this close-call to injuries," the contributor wrote in the post.

The contributor added that she has since reported the incident to the Traffic Police.