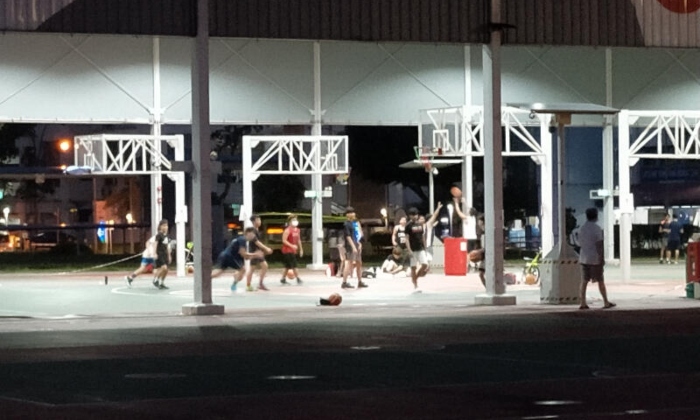 It has been over two weeks since schools reopened fully on June 29 with safe management measures in place, such as the wearing of masks and seating students a metre apart.

And despite being told to go home directly after school, some students have been loitering at malls and void decks, or playing sports in groups larger than the five allowed by the safe distancing rules.

In view of the rise in community cases during phase two of the reopening of the economy in recent weeks, this trend has worried parents, youth counsellors and residents.

When The New Paper checked five basketball courts in Khatib and Bishan last Monday evening, at least three groups of six to eight secondary school or polytechnic students were playing.

Mr Martin Chok, assistant director of youth services at Care Corner, said some of his youth clients, who are in their teens, have also been hanging out late at night to ride e-scooters or smoke in public places with their friends.

He added: "They tell us they know enforcement officers are off work after midnight, so that is when they come out, gather in big groups without masks."

He said his street outreach team recently received a referral from a community club in the north-east region because its staff kept seeing youths congregating in large numbers at the basketball court.

A spokesman for the Ministry of Environment and Water Resources, which oversees safe distancing enforcement at public spaces in Housing Board estates, said it was aware of the situation.

She said there had been fewer breaches of safe distancing rules among youths in phase two compared with the circuit breaker period, especially since they have returned to school.

Students who spoke to TNP said it was common for some of their peers to breach safe distancing rules.

Chan Mun Chun, 17, a first-year engineering student at Nanyang Polytechnic, said: "I know of friends 'balling' in big groups after school. People just go along with it when asked to play.

"But personally, I avoid breaking the rules because I do not want to risk getting fined, or being infected and bringing the virus back to my parents."

Another basketball enthusiast, a Secondary 3 student from a school in Yishun, admitted that he has flouted the rule of five at times.

"It's not as fun to play 2v2 basketball and if it's five people, someone has to sit out," he said.

Nicholas Tan, a Secondary 3 student from Northbrooks Secondary, added: "People our age think the more the merrier. And in school, we can't really mix with friends from other classes at the moment.

"So that's why some people will meet after school."

Mr Chok said peer pressure and a fear of being ostracised could also be reasons that some students flout safe distancing rules.

He added: "For other youths, they might simply not understand the severity of the situation and don't consider the consequences of their actions."

To educate youths about exercising social responsibility, Mr Chok and his team will engage them on gaming and social media platforms.

Mr Ismail Atan, a 49-year-old father of four, said it is paramount that parents set a good example for their children by following safe distancing rules themselves.

"Advice may fall on deaf ears because the kids might not want to listen. So parents must walk the talk and be role models," he said.