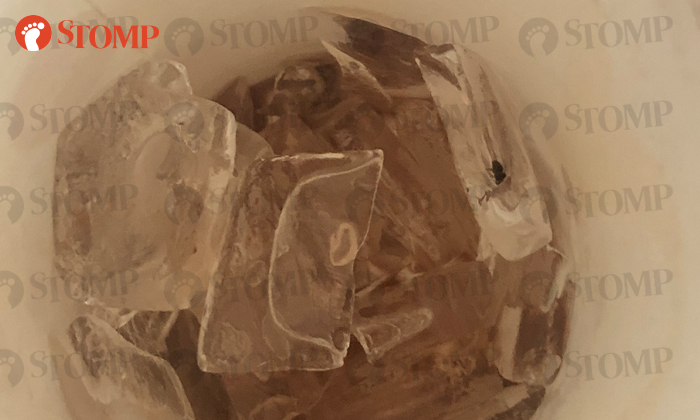 Submitted by Stomper A Concerned Student

A student was left with a bad taste in her mouth after gulping down her iced Milo — only to find an insect in an ice cube inside the drink.

Stomper A Concerned Student had made a takeaway order from McDonald's at United Square shopping mall on Jan 18, at around 10am.

She recounted: "I ordered a sausage wrap meal with coffee and a hotcakes meal with iced Milo.

"After nearly finishing my Milo I decided to gulp the rest of the drink.

"To my surprise, I saw a fly inside an ice cube. The insect was not frozen inside the ice cube but was in the crack of the ice cube."

A Concerned Student said she was left "disgusted" by the incident.

"McDonald's is making me not loving it," she added, referencing the fast food chain's iconic tagline.

The Stomper also said that she did not inform McDonald's about the incident as she had already gone home with her food, adding: "But if I had realised it sooner, I would have told them."

In response to a Stomp query, a McDonald's spokesman said that it had reinforced its operations procedures with the restaurant team concerned upon being alerted.

"At McDonald’s, we are committed to the highest food safety standards as an integral part of our business, and the well-being of our customers is very important to us," the spokesman told Stomp.

"We would like to do right by the customer, as soon as she is able to contact us at customercare@sg.mcd.com."

Related Stories
Woman pours out Milo from McDonald's due to 'unmelted ice' -- that turned out to be plastic lid
McDonald's looking into case of "bug" allegedly found in fries from Ang Mo Kio Park outlet
Pest control activated after diner finds 'cockroach' in teh peng at Kopitiam outlet in Jurong East
More About:
McDonald's
food
food safety
unhygienic
insects