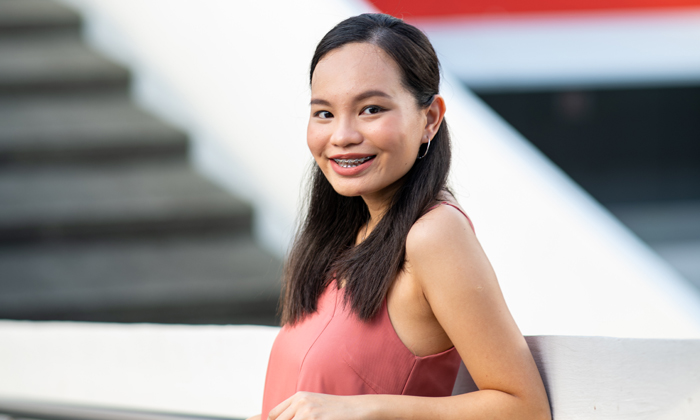 Changing Society, One Act At A Time

The CHIJ St. Joseph’s Convent alumna had pursued the triple science route in secondary school and was fixated on entering a junior college – that was before she learnt about SP’s Diploma in Applied Drama & Psychology (DADP) at the Open House.

What was initially a trip to accompany her friend eventually became a life-changing experience. Judith always had a passion for drama and psychology, and in her own words, it “boggled her mind how two of her biggest interests could work cohesively together to direct change in society”.

She knew she could not pass up such a good offer.

With that in mind, the plucky teen gave up her junior college choices – even though she scored five points for her GCE-O Level – and enrolled in SP’s DADP. And she has not looked back since.

During her three years in SP, Judith was given numerous opportunities to develop her critical thinking and leadership skills via events such as the S Rajaratnam Endowment Youth Model ASEAN Conference (SRE-YMAC) and LKY School of Public Policy’s Festival of Ideas. She was also empowered with the knowledge and skills to reach out to communities and raise awareness for the disadvantaged, something she holds dear to.

After all, the Model Student’s passion to help others stemmed from a deeper place. Judith battled with anxiety disorder in secondary school, and it was only through the help of her psychologist that she could get back on her feet.

Inspired to do the same and give back to the community, the tender-hearted teen worked on a myriad of community service projects with organisations such as Social Services, Let’s Go Play Outside and the National Heritage Board. She also volunteered with Project Fireworks by Boys Town’s Youth Reach, an applied theatre programme aimed to raise the self-esteem of youths-at-risk. The programme was such a huge success that it not only reached out to over 100 audience members but was scheduled for a re-run as well.

Judith also did a five-month internship with AWWA Early Intervention Centre as a teaching assistant, where she worked with young children with special needs. There, she was heavily involved in classroom intervention and therapy, and even designed and executed several activity-based intervention herself. Her hard work eventually paid off when her students benefitted from it and their abilities grew marginally overtime.

For her involvement in numerous community service projects, Judith was awarded the Harvard Prize Book award by the Harvard University Alumni Association of Singapore.

The SP Scholar has already been offered a place at NTU’s Psychology degree programme, and she hopes to advocate for and empower vulnerable and marginalised communities in her role as a psychologist in the future.