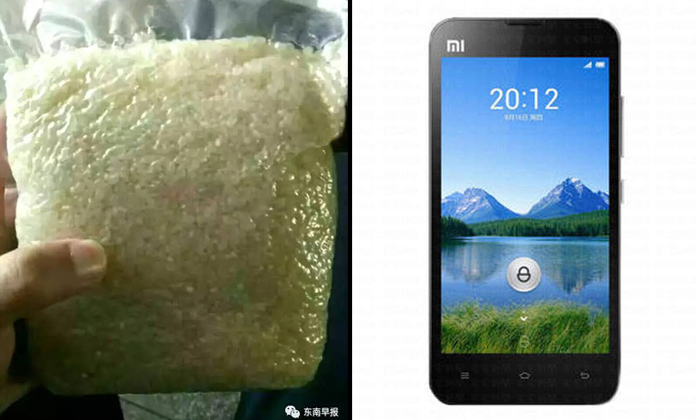 A student in China purchased a Xiaomi mobile phone online -- but his order was fulfilled a little too literally.

According to ifeng.com, the student had paid around 800 yuan (around S$162) for a Xiaomi Mi 5 (a brand new phone of that model would normally cost almost twice as much).

What the buyer got in the mail seven days later was literally 'small rice' aka '小米' (pronounced 'xiao mi').

A label on the package indicated that the parcel left Jilin on Feb 24 and was safely delivered to Fujian five days later.

However, it was then wrongly shipped to Fuzhou instead of the recipient's address in Jinjiang, reported China Press.

And when it finally did reach the correct city on Mar 3, it was dropped off at a local fast food restaurant that receives parcels on behalf of students instead of being delivered to its intended owner.

The restaurant charges the students a dollar for each parcel received on their behalf. As it receives more than 100 parcels every day, missing goods are apparently not all that uncommon.

Although many believe that the seller had cheated the victim, things took an even stranger turn when the police wanted to take the latter's statement, but he went 'MIA' and became uncontactable.

Related Stories
Online buyer learns not to trust others so 'Yeezy-ly' after receiving fake Adidas shoes
Woman buys smart TV on Facebook... only to receive giant slab of plywood
'I got this tank top on Amazon and they sent me a tight dress'
More About:
scam
China
Xiaomi
expectations vs reality
phone
smartphone
small rice
funny