Student beat up teenage clubber accused of flirting with friend's BF, threatened to burn her face and hair 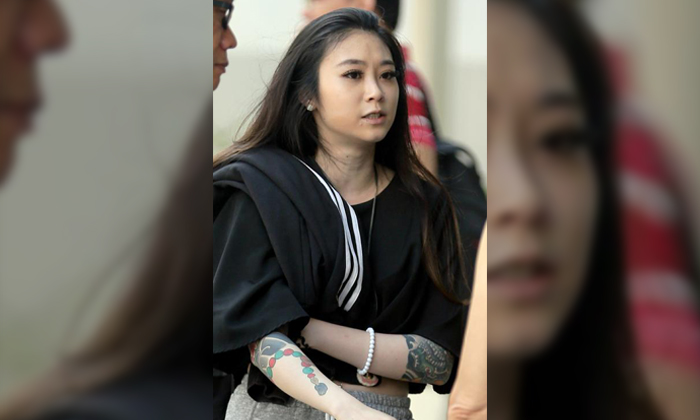 Shaffiq Alkhatib
The Straits Times
May 2, 2019

Five women, unhappy with a clubber they accused of flirting with their friend's boyfriend, ganged up on their teenage victim and rained blows on her.

One of the attackers, art school student Grace Quek Xin Hui, 23, pleaded guilty in court on Thursday (May 2) to one count each of assault, rioting and criminal intimidation.

The other members of her group - Jamie Thng Yu Xuan, 20, Ang Pek Ling and Gina Yeo Kai Ting, both 21, and Tey Shi Hui, 22, have been dealt with in court earlier.

Ang, Tey and Yeo were sentenced to probation, while Thng, who also committed drug-related offences, was ordered to undergo reformative training for at least a year.

Thng was sent to a reformative training centre where she has to follow a strict regimen that includes foot drills and counselling.

Quek and her group were having drinks at Envy Dance Club at St James Power Station at around 3am on Dec 15, 2017, when Yeo said Ms Ng, 19, a clubber at a nearby nightspot, had kissed one of her friends' boyfriends. That friend was not part of the group, the court heard.

Thng, a friend of Ms Ng's, contacted the teenager, who was then at Club Viva, around 4am and asked to meet her outside the nightspot.

The other members of the group came along, as they wanted to confront Ms Ng.

Deputy Public Prosecutor Rimplejit Kaur said: "Upon seeing Ms Ng outside Club Viva, Jamie shouted vulgarities at her, asking her why she had flirted with someone else's boyfriend.

"When Ms Ng denied this, Jamie and the rest of the group... slapped, kicked, punched Ms Ng and pulled her hair... At one point, Quek also pulled Ms Ng by her hair to the ground, held a lighter near Ms Ng's face, and threatened to burn her face and hair."

A passer-by helped Ms Ng escape her attackers and she sought refuge in another club.

In the meantime, Quek and her group spotted one of Ms Ng's friends, Ms Loke, 21, and asked her about the teenager's whereabouts.

DPP Kaur said: "When Ms Loke replied that she did not know, the group got angry (and) started slapping, kicking and punching Ms Loke, and pulled her hair."

Quek also threatened to burn Ms Loke's face and hair with a lighter. The group stopped the assault when a club bouncer intervened, the court heard.

Ms Ng alerted the police the next day. She suffered injuries including a bruised forehead and scratches on her hands.

Separately, Quek assaulted a woman at Club Luxi, also at St James Power Station, at around 4.45am on May 8, 2016. She slapped Ms Hooi, 29, whom she accused of "spreading rumours" about her.

Quek is represented by lawyers Josephus Tan and Cory Wong from Invictus Law Corporation. On Thursday, Mr Tan told the court Quek has cut all contact with her "negative peers".

District Judge Ng Cheng Thiam has called for a report to assess suitability of probation for Quek, who is expected to be sentenced on May 30.

For rioting, she can be jailed for up to seven years.