Stroke patient struggles with cancer for 13 years, makes a living by fixing appliances 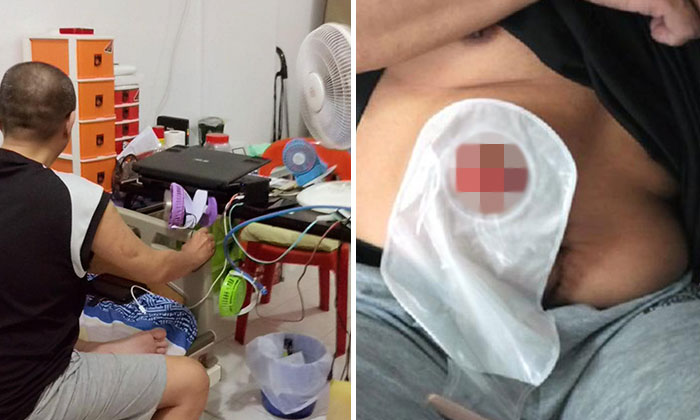 Mr Lin, now 48, continues to work as a repairman, fixing electrical appliances for a living.

He told Shin Min Daily News that he was an aircon repairman back in 2004 when he was diagnosed with colorectal cancer.

After finding out that he had cancer, Mr Lin continued to work so he could support his family.

On one occasion, he felt so weak that he fell while restarting a central aircon unit.

Since then, he has been in and out of hospitals.

“Before I was diagnosed with cancer, I weighed 107kg.

“Since cancer struck, I was left weighing 40kg, and after the operations, the lightest I’ve been was 35kg.”

After the multiple procedures, the doctors created a stoma — a hole which allows the excrete of faeces into an external bag — on Mr Lin’s abdomen.

Fate dealt him another cruel hand when he suffered a stroke in 2015.

With the help of volunteers from the Singapore Cancer Society, Mr Lin started receiving stoma bags and various medications for free.

Mr Lin, a divorcee, currently stays with his 16-year-old son and 19-year-old daughter in a two-room rental flat.

Asked how the family gets by, the resilient man said that they survive on $450 monthly from his Central Provident Fund (CPF) accounts, and another $600 his daughter fetches from odd jobs.

As money is often tight, they are often behind on their utility bills.

Mr Lin also revealed that most of the electrical appliances in their house were scavenged from neighbours who wanted to throw them away.

“These items were all faulty, but I took them back and repaired them.

“Although I don’t have proper education, I have a skill which allows me to get by.

“This is also my hobby.”

Despite his enthusiasm in life, Mr Lin professed that his eyesight has been deteriorating of late and it was not very convenient for him to move around.