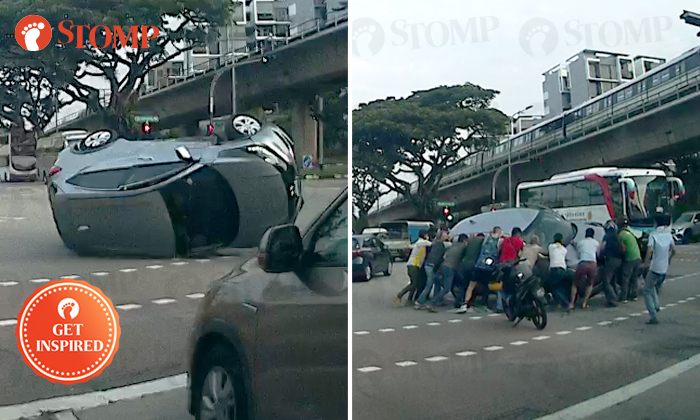 Two cars collided at a road junction in Sembawang on Monday (Oct 18), causing one of them to overturn and leaving its passengers trapped onboard.

The incident occurred at the junction of Sembawang Road and Canberra Link at around 5.40pm.

Stomper Hidayat shared videos showing how the accident happened and how the overturned car was eventually flipped back over by several people.

In one clip, a black car can be seen ramming into a silver car that had been making a turn at the junction, causing the latter to flip over on its side.

Another clip shows a large group of people, consisting of both motorists and passers-by, helping to push the car back upright and succeeding.

Hidayat said: "An elderly couple was trapped inside the overturned car. Several people managed to get the car back upright after assessing the couple's condition."

In response to a Stomp query, the Singapore Civil Defence Force (SCDF) said it was alerted to the accident at about 5.45pm.

It added: "SCDF assessed two persons for minor injuries and they subsequently refused conveyance to the hospital."

Hidayat said: "Kudos to everyone who helped."