Strangers are turning up at 3am in front of Stomper's Hougang flat, looking for something -- but what? 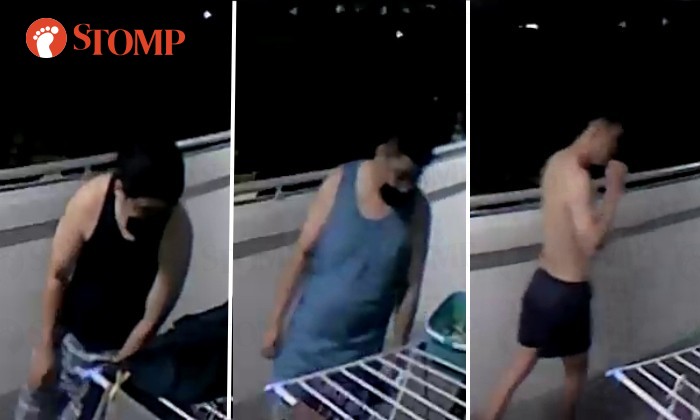 If they are looking to steal her underwear, they are out of luck, said the Stomper.

A strange man has been caught on camera turning up in front of Stomper Ain's flat at odd hours three times this month. He would look for something around the laundry rack outside for a few seconds before leaving.

The first time it happened was on Nov 8.

The Stomper said: "I had just moved to Hougang Street 22 for not even a year yet."

She has a doorbell camera that would send a notification to her phone when motion is detected.

"It was at 3.15am when everyone was asleep," she recounted. "I only noticed the notification at 6am when my kids woke up to go to school.

"When I checked the records, I saw in front of my unit a guy looking at either my clothes rack or shoe rack.

"So far, nothing missing or stolen on that day. I thought it was just a come-and-go incident. But I always sleep late, just to be prepared in case he comes again. He did not appear for quite some time.

"After two weeks, on Nov 24, he came again at 2.15am to do the same thing. My husband and I had just gone to bed. I received the notification and immediately informed my husband. We ran out and tried to catch him but he was gone in a few seconds.

"I got so pissed off and I made an online police report just to alert them."

Three days later, on Sunday (Nov 27), it happened again, but this time, it was a different man.

"At 3.10am, there was another guy without a shirt doing the same thing in front of my home," said the Stomper, who shared videos of the three incidents.

But what are they looking for?

"This question has been playing in my mind and I even asked my husband, 'What is it that they want?'

In response to a Stomp query, police confirmed that a report was lodged.

Related Stories
Man puts on an act to steal 2 pairs of Adidas slippers in Hougang, deserves a Razzie
Hougang resident makes police report after 'student volunteers' visit his unit past 1am asking for donations
RSN taking action against duo who asked for donation out of mischief under influence of alcohol
More About:
stranger
mystery
Hougang
flat