Stranger tries on woman's shoes outside her home, had once left random heels behind 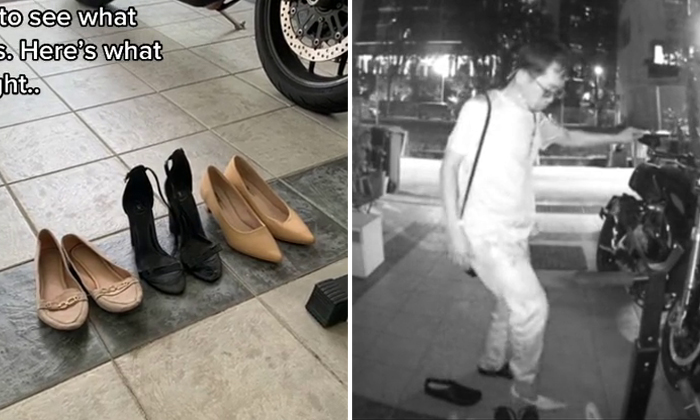 A man was caught on camera trying on a woman's footwear outside her home — and it's not the first time he has visited.

TikTok user Sonya Miller posted a series of videos showing the man dropping by her house on several occasions in December.

In the first clip uploaded on December 13, Sonya shared how she had found "a random pair of heels" outside her house and decided to check the security camera.

A bespectacled man can be seen approaching the house, removing a pair of black heels from a plastic bag and placing it at the doorstep before leaving.

The same man was caught on camera returning to the house again on December 16 and 21. Both times, he appeared to be looking for something.

On December 28, Sonya shared a video showing how she had left three pairs of her old shoes outside "to see what happens".

The man can be seen coming by at around 1.30am and looking at the shoes. He then removes his right shoe and slips his foot into a beige pump to try it on, before picking up a pair of black heels and leaving with them.

The video has drawn over 600,000 views on TikTok, with many netizens speculating about the motive behind the man's bizarre behaviour.

According to Sonya, her house does not have a gate as it is a rented shophouse and multiple police reports have been lodged.

She provided an update on Tuesday (Jan 4) about how the man has been "detained" by the police.