Stompers worried after seeing bright flames in night sky, turned out to be flaring at Jurong Island 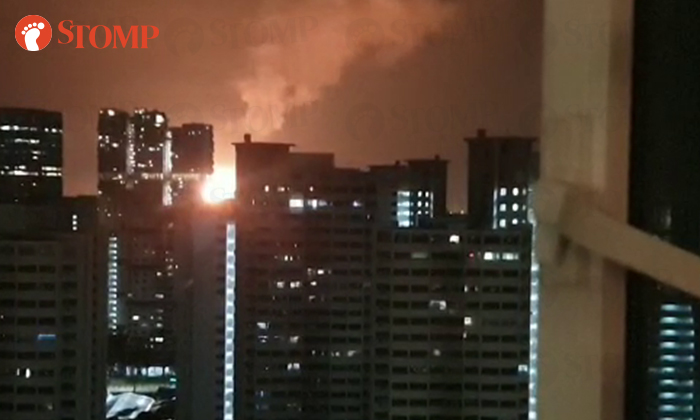 Stompers all across Singapore were worried after seeing bright flames in the night sky on Thursday morning (Nov 28) but Stomp found out that flaring was going on at a facility on Jurong Island.

Several Stompers contributed photos and videos of what they saw.

Stomper C was on her way home from supper at about 12am when she noticed that the night sky was oddly bright and orange.

She told Stomp: "I was with a friend at a time who was driving me home.

"We noticed this when we stopped at a traffic light junction at Boon Lay Way.

"Curiosity got the better of us and we decided to drive towards it.

"As we were travelling along Fishery Port Road, we saw orange flames above the ground and they were shooting upwards.

"It was very smoky and we could see the sky brighten and dim as the flames moved.

"It was quite exciting but we were also quite concerned.

"We travelled towards a checkpoint near Jalan Tepong and realised that the fire seemed to be happening on Jurong Island."

Stomper Leftrightcentre said: "I saw this at about midnight when I was at home.

"I live at Sims Urban Oasis along Sims Drive and took some photos from my unit on the 18th floor.

"I look out of my balcony every night. Last night (Nov 27), I was enjoying the night scenery when I noticed that the sky was bright and orange.

"I saw some white smoke as well but didn't smell anything."

Another Stomper was doing some work at her home at Block 296B Bukit Batok Street 22 when her daughter alerted her to the fire.

She said to Stomp: "It was rather late, about 12 midnight. I was still awake and doing some work.

"My daughter saw it first and said: 'Mummy, mummy! There's a fire!'

"That was when I saw it. It was very smoky so I thought it was a real fire.

"I took these videos from my living room and my bedroom.

"According to my friend, it's apparently normal to see these flames coming from Jurong Island."

Stomper Clarice was preparing for bed at about 12.50am on Thursday (Nov 28) when she looked out of a window from her home at Ang Mo Kio Avenue 1 and was taken aback by the light.

She told Stomp: "I thought it was fireworks but it was flicking non-stop, so I assumed it's a fire.

Stomp understands that flaring was going on at Jurong Island.

A thread on Reddit revealed that a similar incident happened about a year ago.

A Reddit user posted a photo that looks similar to those contributed by Stompers and he wondered if there was a fire going on at Jurong Island.

According to ExxonMobil, flaring involves the burning of excess hydrocarbon gases that cannot be recycled.

Flaring can occur before and after a plant is going through maintenance and also during unexpected operational disruptions like power outages.