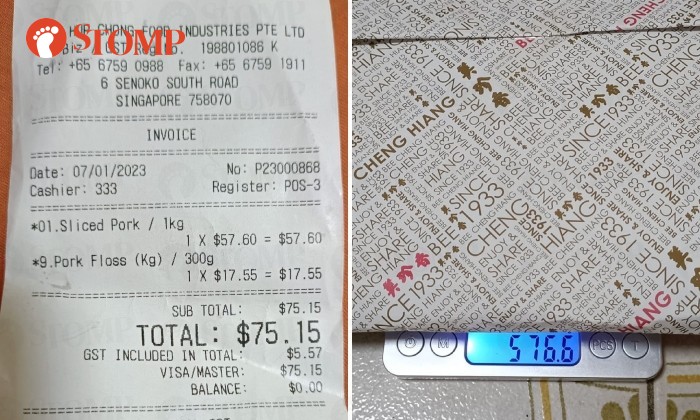 Chinese New Year is coming, so many are buying bak kwa now.

The barbecued meat is usually sold by the weight, but after buying their bak kwa, how many people actually weigh their purchase to make sure they got what they paid for?

Well, Stomper LLX did and he was not happy about what the scale showed him.

"My parents went to Chop Hup Chong at Senoko South Road on Jan 7 to buy Bee Cheng Hiang bak kwa," recounted the Stomper, who shared a photo of the receipt.

"The receipt stated 1kg, but the actual weight was only 500g plus. My parents were charged $57.60 for 1kg. This is an obvious case of cheating the consumers."

The Stomper also shared a photo of the wrapped bak kwa on a weighing scale, which showed that the weight was 576.6g. 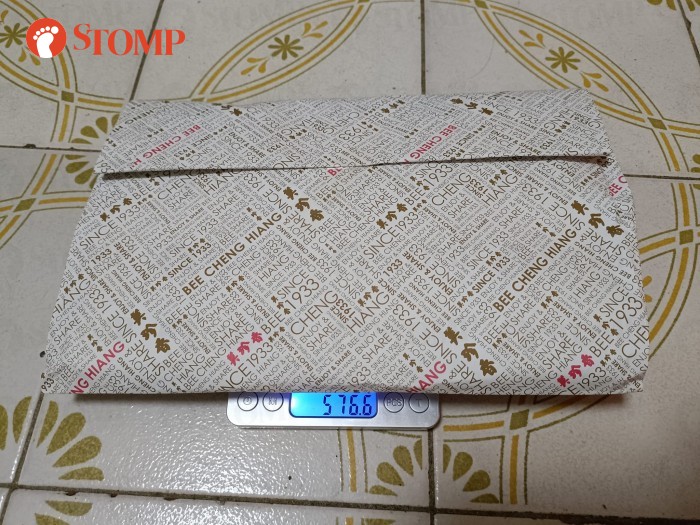 "Our family trusted Bee Cheng Hiang brand so much as it is a reputable international brand for decades. As there have been cases of consumers being given items that weigh less than what was paid for, this has alerted me to weigh the bak kwa.

"True enough, it was short by almost 500g. In other words, my parents were charged double for the amount given to them," said the Stomper.

In response to a Stomp query, Bee Cheng Hiang said: "We are already in contact with the customer to clear up this misunderstanding. Thank you for reaching out to Bee Cheng Hiang."

Bee Cheng Hiang did not elaborate on what the misunderstanding was.

The customer told Stomp: "I have given my feedback to Bee Cheng Hiang. They told me it was a misunderstanding. I told them it is very straightforward. My parents paid for 1kg, but they only received slightly over 500g. Hence, I do not know what the misunderstanding is about."

"Bee Cheng Hiang agreed to issue us back a packet of 1kg bak kwa. I shall update you again after we have received the bak kwa."

"I added that if I had not discovered this case, does that mean their business process would continue as it is? As many who went for the CNY day tour were mostly elderly people, they might not even have a weighing scale at home. If they encountered the same case as mine, they might not even know.

"The reason I wrote to Stomp is I want to share my experience that despite trusting the reputable brand, we do encounter such situations where the company just termed it as a 'misunderstanding'. I couldn't imagine what if I did not discover the case."

When contacted by Stomp, Chop Hup Chong, where the Stomper's parents bought the bak kwa, said: "Our staff could have given them the wrong pack or made a mistake in wrapping the bak kwa, as there are times when the crowd is overwhelming.

"We do understand the frustration of the customer and we will rectify the mistake."

After the article was published, the Stomper read the comments and shared this response: "I understand the concerns raised by members of the public.

"However, I was quite turned off by Bee Cheng Hiang's first email reply from their marketing executive where she mentioned that it was a misunderstanding. I was expecting them to admit their mistake and apologise. As a loyal consumer, I expected them to honestly admit the mistake and not classify it as a 'misunderstanding'.

"Secondly, Chop Hup Chong said: 'Our staff could have given them the wrong pack or made a mistake in wrapping the bak kwa, as there are times when the crowd is overwhelming.'

"Personally, I feel that this is like an excuse again. This is not the first time they are selling bak kwa during the festive season. Their management could have anticipated the high demand and crowds. However, in my opinion, I am sad to say that their current daily operation doesn't seem to be able to manage situations like this.

"From a micro level, some readers might say, just talk to the company and close the case. Don't need to share with the media. But from a macro level, in my opinion, I am not sure I am the first in this situation. Had I not discovered this case, had I not weighed the bak kwa, I am not sure if such business practices would continue. Would that also mean more 'unintentional' profit from the sale of bak kwa? Were my parents so 'lucky' to be the first victims of such a misunderstanding?

"Bringing this case up and sharing it with the public is to alert the consumers to be more vigilant so that their hard-earned money won't be lost in such a 'misunderstanding'."

Related Stories
Stomper amused by 7-Eleven's pricing of Pokka green tea in Yew Tee outlet: 1 bottle for $1, 2 for $3.90?
Seafood restaurant customer pays $72 for 2 crabs, unhappy 1 is half the size of the other
Woman pays same price for each Don Don Donki baked sweet potato but one weighs 104g less