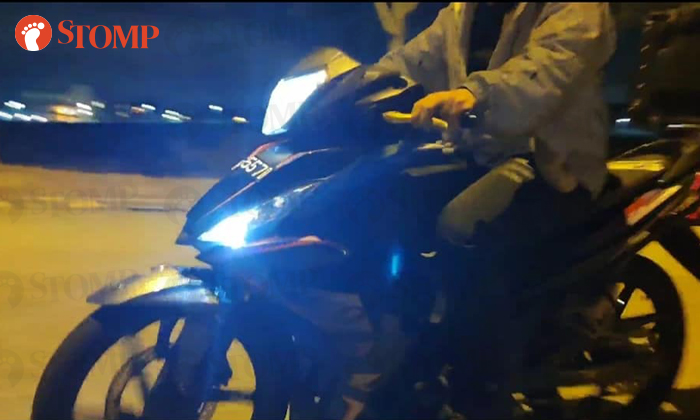 Three men, aged between 16 and 22, have been arrested for their suspected involvement in a series of theft of motorcycle cases.

This comes after Stomper Sulaiman shared how his motorcycle had been stolen while parked at the basement carpark of Heartbeat @ Bedok on Monday (April 19).

In an earlier article, Sulaiman said he parked his motorcycle at around 9.55am and found it gone when he returned at about 11.30am.

The police said they received a report about the stolen motorcycle at Bedok North Street 1 at about 11.55am.

Through extensive ground enquiries and with the aid of images from CCTV and police cameras, officers from Bedok Police Division established the identity of a 21-year-old man and arrested him on Wednesday.

The missing motorcycle was recovered along Bukit Merah View. Sulaiman also confirmed that he has been reunited with his bike.

Following the arrest of the man, police established the identity of his two accomplices, aged 16 and 22, and subsequently arrested them on Wednesday and Thursday respectively.

Further investigation revealed that the three men are suspected to be involved in a series of theft of motorcycles cases in Bedok, Bukit Merah View and Ang Mo Kio.

The three men will be charged in court on Friday with theft of motor vehicle with common intention, carries a jail term of up to seven years and a fine.

In a statement, the police also advised all motorcycle owners to adopt the following crime prevention measures:

My motorcycle got stolen today at Heartbeat@Bedok basement Carpark. I arrived and parked at the bike lot Ard 9.55am....

Related Stories
Man's motorcycle goes missing after suspected theft in Bedok -- even though key is with him
Man's $600 e-bike stolen from Potong Pasir HDB block: "I used it to travel to work"
Man caught on camera taking bicycle worth more than $10k at Jalan Bukit Merah
More About:
theft
stealing
biker
motorcycle
arrest