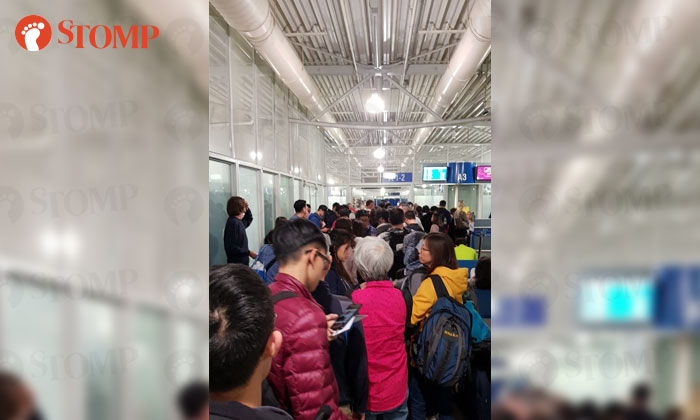 More than 300 passengers on a Singapore-bound Scoot flight were stranded in Athens, Greece for almost two days after a technical fault on the Boeing 787 plane led to multiple delays.

Stomper Mui alerted Stomp to the delay and said that her daughter was one of the affected passengers on Scoot flight TR713.

"She was then brought to a Marriott to stay after waiting seven hours in the airport.

"She was then supposed to fly yesterday (Dec 20) but couldn't again.

"I don't know what is happening."

In response to a Stomp media query, a Scoot spokesman said the flight met with a delay due to "operational considerations arising from equipment limitations".

This is their statement in full:

"Due to operational considerations arising from equipment limitations, Scoot flight TR713 operated by a Boeing 787 scheduled to depart Athens for Singapore at 11.20am local time on 18 December 2018 had to be delayed as resolution took longer than expected.

"A decision was then made to disembark customers first for their convenience.

"A total of 321 customers who were affected were then provided snacks and refreshments.

"Once the issue was resolved, customers re-boarded the aircraft in preparation for departure, but in the midst of doing so the operating crew’s flight time limits unfortunately ran out.

"This then necessitated a grounding of the aircraft with a re-scheduled departure timing of 11.00am local time on 19 December.

"During this delay, hotel accommodation and meals were provided to customers.

"On 19 December 2018, while the retimed flight TR713 was preparing for pushback, Scoot was informed that flight approval had been rescinded.

"As such, customers unfortunately had to disembark the aircraft.

"Scoot then decided to mount a ferry flight from Singapore to Athens to fetch affected TR713 customers back to Singapore.

"In the meantime, Scoot sourced for and arranged accommodation and meals for customers in Athens.

"The estimated time of departure from Athens for the TR713 ferry flight is now set for 20 December, 7.00pm local time.

"Should there be any changes, our staff will update the customers directly.

"Scoot sincerely apologises for this extended flight disruption and the inconvenience it had caused to our customers’ travel plans.

"Affected customers can opt for a refund via vouchers or to their mode of payment, if they prefer not to continue their travel with Scoot.

"Customers who choose to continue their journey with Scoot will be compensated based on our Guest Promise: https://www.flyscoot.com/en/fly-scoot/who-we-are/our-promise-to-you."