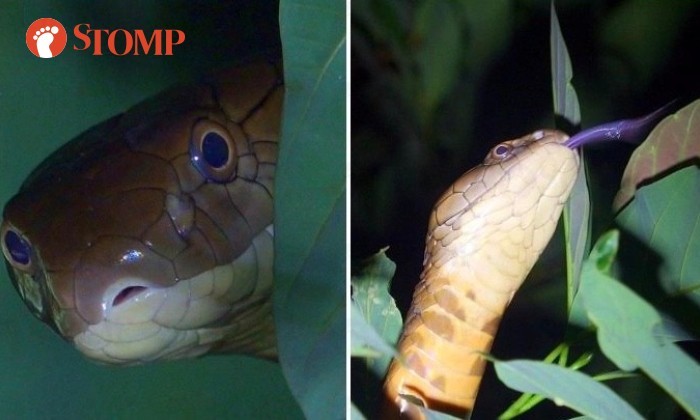 Have you ever seen a king cobra in real life? Stomper Christian has.

And not only did he have a close encounter with the snake, he managed to capture it on photo and video too.

He came face-to-face with the 4m-long giant king cobra near Central Catchment Nature Reserve on Saturday (July 11) at 2am.

The Stomper shared: "I was with a friend walking around the outskirts of the forest in that area.

"I want to keep the exact location a secret in case anyone decides to capture or kill the snake, and also because I don't want an army of photographers and snake enthusiasts flocking there.

"We had an uneventful evening searching for snakes and wildlife and were about to head home when I spotted what seemed to be like a snake on the ground, at the base of a tree.

"It was half erect, maybe about 1.5m in the air. At first I thought was a large stick, then I saw it move and realised it was a gold king cobra!"

Christian also explained that the snake sensed his presence and immediately slithered up the tree.

He recounted: "It then put on a show for us while moving around up in the tree. It didn't seem aggressive at all, but maybe it was annoyed that we were watching it.

"The snake then came down the tree after 20 minutes and slithered away.

"I made direct eye contact with it for quite a while. I could see in the snake's eyes that it was very intelligent."

And if you were wondering if the snake attempted to attack Stomper Christian, it did not.

"I never felt any aggression from the snake at all. Of course we kept our distance and did nothing to aggravate the snake," he added.

"This is very important. Snakes are not dangerous to humans unless you provoke them."

The Stomper also caught this close encounter with the snake on video.

Christian shared: "You can see from the video that the cobra could even be longer than four metres! I'm not too sure, but I believe the largest cobra ever captured on video in Singapore is even smaller than this one.

"The whole encounter was very special.

"The nature in Singapore is a joy and full of surprises. We must preserve the small patches of forest and natural habitat we have."