Stompers cheated of up to $600 by Carousell users selling face masks: 5 arrested in separate cases 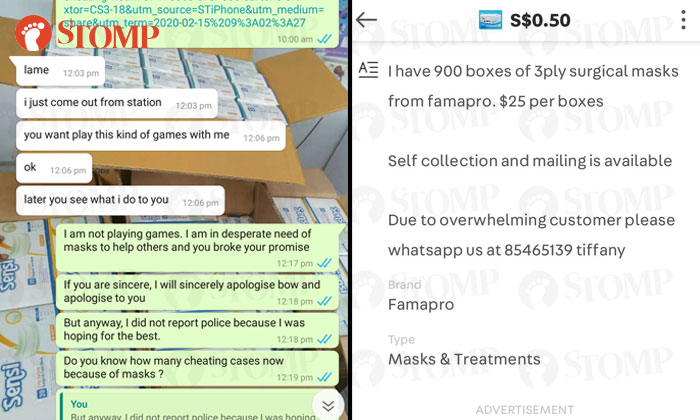 There appears to be a new scam emerging on Carousell involving sellers advertising the sale of face masks only to go missing in action (MIA) after getting paid.

Two Stompers alerted Stomp to the scams after becoming victims themselves.

Stompers Rex and Jimmy lost $400 and $600 to the scammers respectively.

Rex told Stomp he found a seller on Carousell claiming to have 900 boxes of masks and selling them at $25 per box.

"I ordered 100 boxes because I wanted to give them out to schools," he said.

"It's part of an initiative among my friends who want to give masks to other institutions like old folks' homes.

"After receiving the deposit of $400, they stopped answering.

"From the start, we told them this will mostly be for charity works, helping children, the old and the needy.

"Yet, they seem to have cheated us."

Similarly, Jimmy contacted a Carousell seller who was selling masks at $30 per box of 50 masks and ordered 20 boxes.

"This scum bag asked for payment in advance and advertised that he only accepted bulk orders," he said.

"He mentioned that he will ship out the masks by Ninja Van and provided his address too."

Jimmy had paid $600 via PayNow and was told that he would receive the tracking identification number in a few days.

However, he never received his delivery.

"My purchase was meant for charity purposes and the money was contributed by many sponsors," he said.

"I would advise the public not to practice payment in advance."

Both Rex and Jimmy have made police reports.

The police confirmed with Stomp a report was made and investigations are ongoing.

On Tuesday evening, the police released a statement that four men and one woman, aged 17 and 26, were arrested for allegedly cheating customers over face masks sold on Carousell amidst the coronavirus outbreak here.

The police said since late January, they have received several reports from people who said they were cheated by sellers after paying for face masks on Carousell.

The sellers would become evasive and uncontactable after payments were made by buyers via bank transfers.

The police said they "take a serious view of those who take advantage of the current Covid-19 situation to perpetrate crimes", referring to the disease caused by the coronavirus which originated from China's Wuhan city.

Those found guilty of cheating can be jailed up to 10 years and fined.