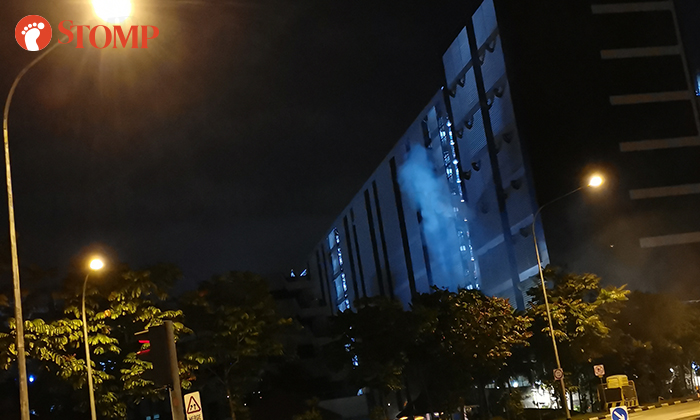 A Stomper was worried that a fire could be happening at 29A International Business Park Road after he saw smoke emitting from the building at about 9.45pm on Monday (Dec 23).

Stomper Kenneth was passing by the area when he noticed the smoke. He took a photo of what he saw and shared it with Stomp.

He said: "I saw a lot of smoke coming out from Digital Realty's building in Jurong East as I was driving by.

"It's pretty unusual for such large volumes of smoke to be coming out from a building, so I was wondering if there's a fire.

"I was quite a distance away from the building so I couldn't smell the smoke."

Responding to a Stomp query, a Digital Realty spokesperson said: "The smoke emitted from the Jurong facility is not the result of a fire in the building, but is part of the standard monthly maintenance of the facility’s diesel generator.

"The generator emits some smoke during the start-up of the generator that then goes away after complete combustion.

"Digital Realty takes its environmental responsibility seriously and the facility’s generators use only ultra-low sulphuric diesel as per the National Environment Agency guidelines."

Related Stories
Flames engulf recycling bin at Upper Boon Keng Road
Mazda driver gets out of car in time before it's engulfed in flames on TPE
75 residents evacuated after unattended cooking causes fire in Woodlands flat
More About:
Jurong East