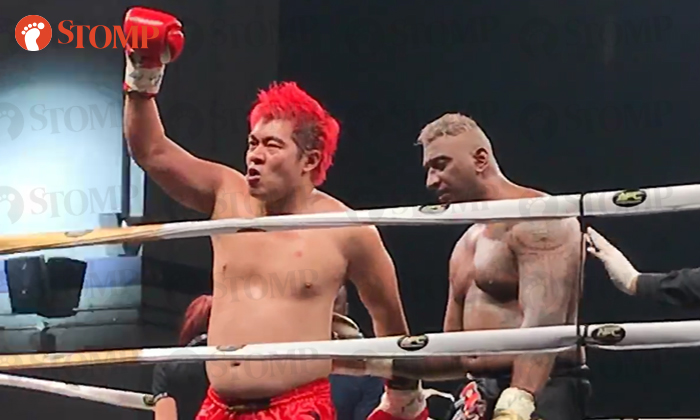 A member of the audience who watched bodybuilder Pradip Subramanian's Muay Thai match with online personality Steven Lim at the Asia Fighting Championship (AFC) last night (Sep 23) has recounted what she saw.

Stomper Amanda was seated near the stage during the event at Marina Bay Sands (MBS) and contributed videos of the fight.

She also related the events of the tragic night and shared her thoughts on the incident.

In a phone interview, Amanda told Stomp: "I guess it's just quite a weird feeling because we saw him beaten [on stage] right before he passed out.

"It was supposed to be a friendly match and there were only two rounds, unlike the other fights.

Asked if she noticed anything unusual or not right when the bout concluded with Lim as the winner, Amanda said: "After Steven won and they played the national anthem, Pradip appeared to pass out.

"His family members and coaches surrounded him and were fanning him.

"He couldn't stand upright and his eyes were closed. He looked completely zoned out."

"Later, I heard the news of his death from my boyfriend's friend, who is a bodybuilding enthusiast, and from social media.

"I'd thought he would get better. I didn't think this would happen."

According to the preliminary medical report released by SGH, he suffered a cardiac arrest respiratory failure episode which led to his death.

"The final medical report will be released in 30 to 60 days," AFC Holding Singapore told Stomp in a statement.