Stomper warns of "aggressive" phone calls and texts from moneylenders 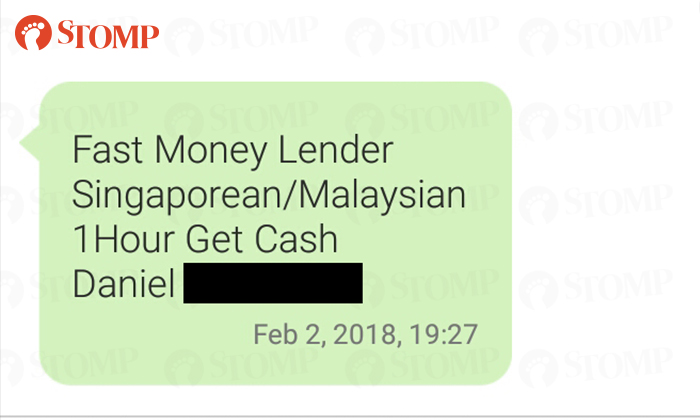 Even after he had switched numbers, Stomper Anonymous continued to receive messages and calls from moneylenders.

Some examples of text messages he would receive include:

"How did these moneylenders get my number? I don't know," said the Stomper.

He had even received a call from one of the moneylenders who had sent him the text message on the same day.

In a telephone interview with Stomp, he shared his experience with the moneylender over the phone: "That day I received a phone call from the moneylender. He was very aggressive and raised his voice at me, asking if I want to take a loan."

After saying that he was not interested, the moneylender abruptly hung up on him.

The Stomper also said: "These moneylenders that are very smart. You borrow $500 and then you have to pay back 3-4 times the amount.

"They ask via installments and then within a few months they will see profit because of the interest rate. That's how their business is (profitable)."

The Stomper added" "I would like to advise the public to be aware of this and not fall into this trap."