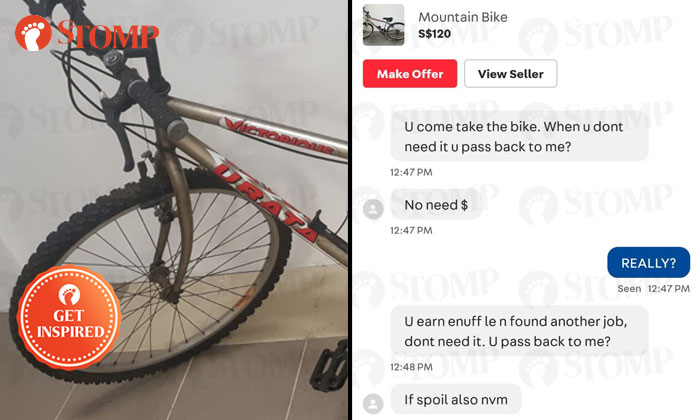 Despite the gloom of the Covid-19 outbreak, there are people who are bright reminders that faith in humanity still exists.

Stomper Jeffrey had been retrenched by his company earlier this month and decided to look for a second-hand bicycle so that he could do GrabFood deliveries in the interim.

Over the weekend, he found a bike that was listed for $120 on online marketplace Carousell.

"I asked him if he could negotiate the price after telling him I was going to do GrabFood deliveries so that I could have some income during this period," he said.

"Without hesitation, he decided to lend me the bicycle for free."

Jeffrey shared with Stomp screenshots of his conversation with the seller named Allan.

Allan provided the Stomper with a new padlock and even delivered the bike to Sims Drive personally from Yishun.

He added that Jeffrey could use the bike for as long as he needed to and to return it when he was done. He said it did not even matter if it happened to be damaged.

"I even offered to pay him a deposit but he declined and said it is okay," said Jeffrey.

"No words can express how much I am thankful to have met him.

"I hope during this Covid-19 period, everyone can be like him and also obey the law at the same time to prevent the virus from spreading from one person to another."

Related Stories
'Sibeh hot and sibeh long queue' at Giant Hypermarket, but kudos to staff for giving out water
Stranger gives Deliveroo rider $10 after seeing him waiting to pick up order at restaurant
Neighbours spread cheer by 'jamming' on their balconies: 'A period where strangers become family'
More About:
inspiring
kind
charity
Generous
Carousell
bicycle
bike