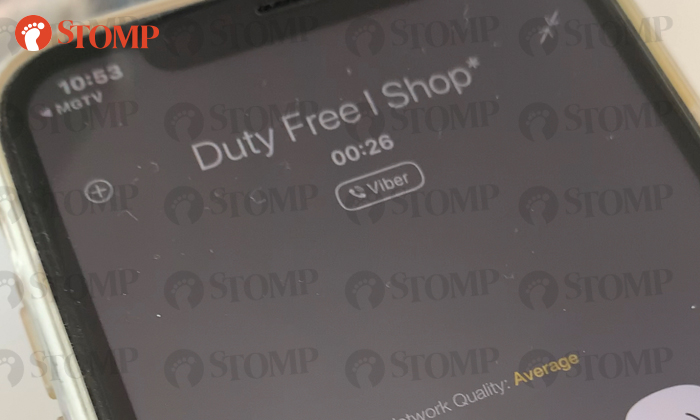 A scammer probably thought he was making an easy target out of Stomper Anti-scam -- only to end up cussing angrily upon realising that he was the one being taken for a ride.

Anti-scam told Stomp that he received a scam call from India via Viber on Sunday (Nov 17) and decided to troll the other party.

The Stomper, who shared an audio clip of the phone conversation said: "The caller claimed that I had won something and requested that I give him the six-digit One-Time Password (OTP) for verification that had been sent to my mobile number.

"I played along and gave him fake numbers three times."

"On the third try, he realised the joke was on him and started using vulgarities."

In the audio clip, the scammer can be heard informing Stomper Anti-scam that he had won $50,000 from "Changi iShop Duty-Free".

The scammer also repeatedly asked Anti-scam for his OTP verification code in order for the prize to be transferred over.

Anti-scam gave the scammer three different sets of numbers throughout the call.

When the third OTP still did not work, the scammer finally realised that he was being trolled and said: "Eh, f*** you, motherf***er."

In an advisory on Tuesday (Nov 19), the police said they have received at least 30 reports of such lucky draw scams between July to October 2019. The total amount cheated was at least $40,000.

In these scams, scammers misused Changi Airport Group-related names, such as 'Changi Millionaire', to obtain the credit card and bank account details of victims through unsolicited calls.

Just like the Stomper's encounter above, victims were told that they had won a prize in a lucky draw campaign organised by Changi Airport Group.

They were then asked to provide their credit or debit card details and bank account information in order to claim their prizes, along with the OTP sent to their mobile phones.

"The victims eventually realised that they were cheated after discovering unauthorised transactions made on their accounts," said the police.

In some instances, victims were also asked to purchase iTunes cards and send the accompanying codes to the scammers over the phone.

In recent cases, scammers even made unauthorised top-ups to the victims' Singtel Dash accounts using their credit card information, before making fraudulent transactions through the said accounts.

The police advised members of the public to adopt the following crime prevention measures:

Those who wish to provide any information related to such scams can call the police hotline at 1800-255-0000, or submit it online at www.police.gov.sg/iwitness. For urgent police assistance, dial '999'.

Related Stories
Scammer poses as Stomper's friend, asks for codes to buy $1.6k worth of Google Play gift cards
Stompers play along with SMS from "Sheng Siong" that informs win: 'If I won, why need lucky draw?'
Phone call claiming to be from "Singapore's CID" asks for ATM card details to verify account
More About:
scam
funny
troll