Stomper stranded in Taipei on NYE after Scoot flight delay, back in Singapore after 2 days 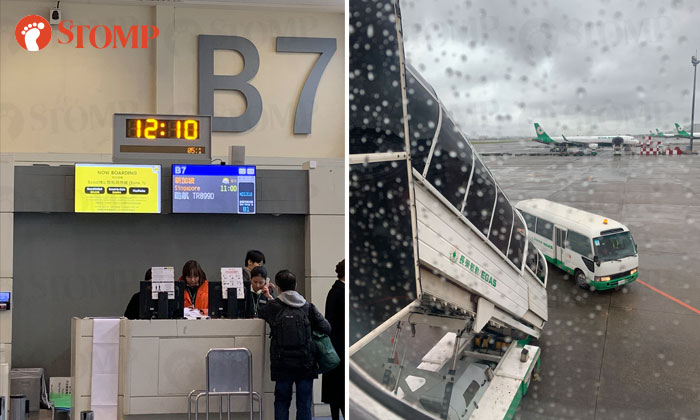 Passengers on a Scoot flight from Taipei to Singapore were stranded for two days due to a technical issue that persisted from Dec 30 to New Year's Eve (Dec 31).

Stomper WXY was one of the affected passengers on flight TR899 that was supposed to depart Taipei at 4.10pm on Sunday.

She told Stomp that the passengers were made aware of the issue after they had boarded the plane.

"We boarded per normal but the pilot announced that there appeared to be an engine fault and that they were trying to fix it," WXY said.

"After trying a few times, we were asked to disembark at about 7pm."

The Stomper said they were then brought to a holding area in the terminal and given meal vouchers.

They were instructed to return at 9pm.

However, when they arrived back in the holding area, she said nobody had any updates for them.

"There were only Taipei ground staff and no Scoot personnel," she said.

"We were then instructed to look for a hotel to stay at and that we would be reimbursed for our accommodation so we started searching for a place past 10pm.

"However, there were no further instructions and only when we approached a ground staff, he said to book a standard room and not to book a place that was too ridiculously priced."

The group of travellers were then asked to return to the airport at 8am for their flight that had been rescheduled to depart at 11am on Monday.

"When we came back, there was a long line forming so they created a special check-in counter for our Scoot flight.

"By the time we cleared check-in, it was already 10am.

"While we waited at the gate, the time changed to 11.50am and we finally boarded past 12pm.

"However, there was still a fault and we were asked to disembark again around 2pm.

"We were given another meal voucher and asked to return at 5.30pm."

WXY said that the whole saga was confusing for her and her family who returned at 5.30pm but did not know what was happening.

"Only those who approached counter staff knew that there would be two planes to take us back to Singapore.

"We didn't know how we would be allocated.

Eventually, the passengers were divided and most of them put on a larger plane operated by Singapore Airlines.

The Stomper and her family were put on the smaller Scoot flight.

"We were told that our flight would depart at 10.25pm and boarding would start at 9.40pm," she said.

"We then boarded the flight at 11pm and waited for it to take off.

"When it finally did, we could see fireworks on the plane indicating that it was past midnight and already the New Year."

After a very tiring ordeal, WXY and her family reached Singapore in the early hours of Tuesday but she told Stomp that they also had issues finding their baggage when they arrived at Changi Airport.

"We were told to go to belt 32 to retrieve our baggage but they were not there," she said.

"It was only until another passenger alerted us that we discovered our baggage had been left at belt 38 instead."

In response to a Stomp media query, a Scoot spokesman provided the following response to what had caused the flight delay:

"Due to an electrical component defect, flight TR899 scheduled to depart Taipei for Singapore on 30 December at 4.10pm had to be grounded while replacement parts were flown in from Singapore.

"The flight was retimed to depart on 31 December at 11.00am local time.

"Despite having replaced the faulty parts, the technical issue persisted on 31 December.

"To mitigate further disruption to our customers’ travel plans, Scoot has arranged for two rescue flights to bring the 356 affected customers back to Singapore.

"The two rescue flights are scheduled to arrive Singapore by early morning of 1 Jan 2019.

"Affected customers were provided with refreshments and meals during the delay.

"Customers who had sought their own accommodation will be offered reimbursement upon their return.

"In addition, a Guest Promise Voucher of S$100 will be offered to the affected passengers.

"Safety is of utmost priority to Scoot, and we sincerely apologise for the inconvenience caused to our customers’ travel plans."