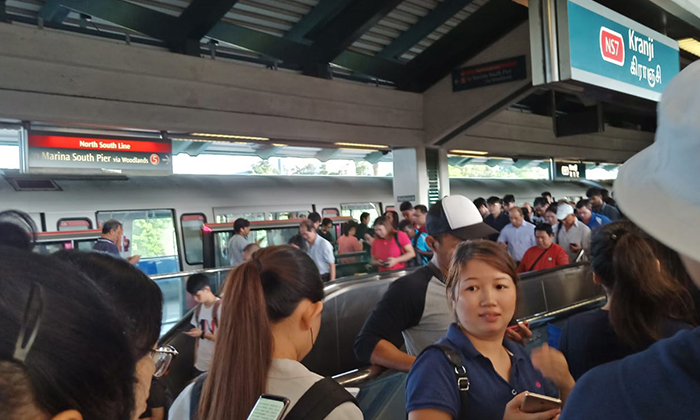 At about 10.10am on Monday (Dec 16), a Stomper shared that she's still on the way to work two hours after a signalling fault occurred along the North-South line.

Several Stompers contributed photos of what they saw at the MRT stations along the North-South line.

Stomper Priscilla was at Woodlands MRT Station at about 8am when she got to know about the signalling fault.

She told Stomp: "There wasn't any announcement or sign before I entered the train station.

"I had to go up to the platform before I saw a display board that mentioned train services were ending at Kranji MRT Station.

"There was barely any space to move.

"Everyone was pushing and it felt like a stampede, it was terrible.

"I needed to get off the train at Jurong East but ended up having to alight at Kranji MRT Station.

"It was so difficult to get out of the station at Kranji because of the crowds.

"I took a random bus and alighted at Bukit Panjang MRT Station. It's about 10am now and I'm still on the way to work."

Stomper Susan contributed photos and a video of the crowds from this morning.

Susan told Stomp: "Everyone alighted from the train to take a bus.

SMRT Corporation then said in a Twitter post at 8.49am that the signalling fault had been rectified and train services were progressively returning to normal.