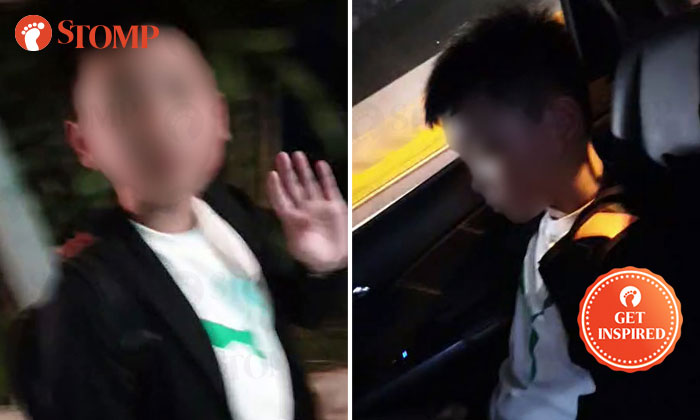 It is heartwarming to see Singaporeans rally together to help those in need of help.

Stomper Mark had just finished fishing with his friend Jubel at MacRitchie Reservoir on Wednesday (Nov 13) at about 7.30pm when they came across a young boy waiting alone at a bus stop near a golf course.

He found it unusual that the boy, who he guessed was about seven years old, was alone in the area as it was isolated and getting dark.

"I asked him what was wrong and if he was okay," said Mark.

"He started crying. That was when I knew he must be lost."

Mark tried talking to the boy but he did not seem to understand English.

"I used the Google Translate app on my phone to ask him where he wanted to go," the Stomper said.

"He took out an electronic dictionary from his backpack and typed something there but there were just numbers and it didn't make any sense.

"We then took a bus together to Adam Road Food Centre where I bought him an iced Milo and asked a Chinese couple to help me translate.

"They managed to speak to the boy and said that he needs to go to Block 174 Lorong 1 Toa Payoh.

"My friend Jubel needed to go home at that point so I booked a Grab ride to the address."

Kindness begets kindness because as soon as Mark told the Grab driver about the boy's predicament, he refused to let him pay for the ride.

"The driver told me I didn't need to pay because I was helping the boy," Mark said.

"When we arrived at the block, he led me to the eighth floor where his mother was already waiting for him.

"She hugged him and kept thanking me but I couldn't understand the rest of what she said.

"It's a small issue but I hope parents will be more mindful of their children as it is easy for them to lose their way.

"I don't know what the boy was doing at MacRitchie without a phone and not knowing his parents' number.

"I'm just happy to find many Singaporeans who are more than willing to lend a helping hand."