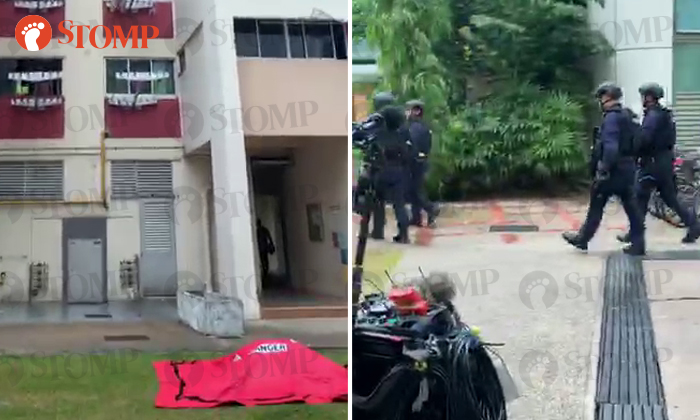 The sight of police officers all geared up with rifles in Toa Payoh Central on Monday (Jan 6) left Stomper Ricky wondering if something major had happened.

He also thought that a death might have occurred due to a red sheet that appeared to be covering something at the foot of a HDB block.

Rick said: "My wife was sending my daughter to school at around 5pm when she noticed a commotion near Block 173.

"She took a video and sent it to me.

"I thought that someone had died or there was a suspected dangerous item found, hence the police."

Fortunately, that was not the case.

In the video, several men dressed in the police uniform and helmets, some of whom were holding rifles, can be spotted at the scene.

A bright-red sheet labelled 'danger' can also be seen covering an object on the grass patch at the foot of the block. A police cordon surrounded the grass patch.

The commotion had caught the attention of numerous onlookers.

However, if you look closely, you will notice multiple cameras on what is actually a film set and crew members manning them.

Stomp understands that this is all part of a production for television programme Crimewatch.

Curious about what crime or incident is being showcased in this instance? Well, you will have to catch next episode of Crimewatch to find out.